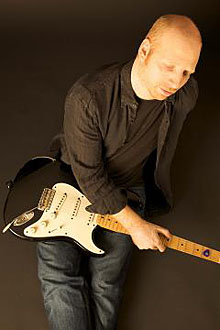 slideshow
Oz Noy's Schizophrenic (Magnatude Records, 2009) is the perfect moniker for the Israeli-born, New York-based guitarist. With an array of influences ranging from Charlie Parker to Jimi Hendrix to Stevie Ray Vaughan, Noy melds elements from funk, rock, blues and jazz into his own unique, personal take on modern instrumental music.

Noy's solos seem to be in constant flux as he weaves in and out of hard-driving rock grooves, jazzy based harmonic progressions and rhythmically complex, often lightening fast, improvisations. Listening to Noy's compositions and solos reveals a musician that may be described as having musical schizophrenia, but also one that has emerged with a voice like no other.