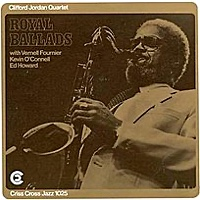 slideshow
Tenor saxophonist Clifford Jordan is probably best known for the eight live and studio recordings he made in 1964 with the sextet led by bassist Charles Mingus. But there was much more to Jordan. A prolific recording artist, Jordan had a big, round sound from the start in March 1957, when his Blowing in From Chicago album was released on Blue Note. Jordan played as a sideman on the albums of several dozen jazz greats and recorded more than 35 albums as a leader. Rather than distinguish himself with a signature attack, like Sonny Rollins, Sonny Stitt, John Coltrane and other saxophonists, Jordan focused more on perfecting a beautiful tone that seemed to linger in the air.

Interestingly, this album is perfect for those who are unfamiliar with Jordan and want to get a feel for his horn. Then I'd jump to his first ablum, Blowing in From Chicago with tenor saxophonist John Gilmore, and work forward. Royal Ballads has Jordan's silky sound, his lyrical improvisation and his full-range approach, reaching to the bottom of the register and the top on the same song. As I've written before, Jordan is often overlooked, largely because there wasn't a distinguishing spin to his style or tone. Just a smooth huskiness and rock-solid confidence.

JazzWax tracks: Here's Everything Happens to Me...

Bonus: Here's Jordan with Dizzy Gillspie (tp) and Horace Parlan (p) in Köln, Germany in 1986 playing 'Round Midnight and Caravan...