I like the fact that 'Bass Ball' is going to give people an opportunity to hear some of the best bass players they’ve never heard before. –Stanley Clarke 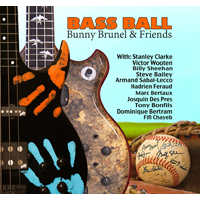 slideshow
“I think Bass Ball is a great, innovative record with some of the best bass players in the world, encompassing a variety of styles.” –Bunny Brunel

If you like the bass, then you will love Bass Ball, a new CD encompassing everything that’s great about the bass. The innovative album is produced by Bunny Brunel and Stanley Clarke; and has been five years in the making. Bass Ball features Bunny Brunel and Stanley Clarke, featuring solos by Billy Sheehan, Victor Wooten, Steve Bailey, Armand Sabal-Lecco (who also composed “Stand Out” on the album), and more. Wanting to add a French flavor, Bunny Brunel invited a few musicians, including bass players from his country to be a part history in the making.

“The French bass players who also play on Bass Ball are famous in France, but not well known here. I was the one who had the privilege to come to America and play with Chick Corea and Herbie Hancock, and others. But there were many bass players in France who were also very good,” remarks Bunny Brunel.

“I wanted to write a song from my hometown in Nice, France. At the very entrance of Nice is a bay called Baie des Anges [translation: Bay of the Angels]. So I composed and named the tune 'Bay of the Angels' and decided to have musicians from my hometown perform on the song; they are trombonist Alex Perdigon, trumpeter Eric Giausserand, bass players Tony Bonfils, Dominique Bertram, Fifi Chayeb (Billy Cobham). There are other songs featuring Josquin Des Pres from St. Tropez, and Marc Bertaux and Hadrien Feraud from Paris,” concludes Bunny Brunel.

Bunny Brunel and Stanley Clarke make their presence know on all of the songs on Bass Ball. The two virtuosos (Bunny and Stanley) have very distinctive playing and soloing styles, making it easy to guess who's playing what on the album. In the liner notes, Bass Ball carefully outlines each bassist's part. However, If you know your bass players, you'll have no trouble identifying these iconic players.

All the bass players are truly the stars on this album, making Bunny Brunel and Friends- Bass Ball the first CD of its kind in the history of recorded albums. Rest assured... “There will be a Bass Ball 2!” –Bunny Brunel and Stanley Clarke

Bunny Brunel & Friends- Bass Ball on Nikaia Records will be available February 2017 on iTunes, CD Baby, Amazon.com, and in stores.

Grammy-nominated, virtuoso Bunny Brunel is a French-born, American bassist who is best known as one of the four founding members who started the “Bass Fusion Movement," along with Stanley Clarke, Jaco Pastorius, and Jeff Berlin. He has performed and recorded with Chick Corea, Herbie Hancock, Al Jarreau, Natalie Cole, Tony Williams, Georges Moustaki, Michel Polnareff, Jack DeJohnette, Milt Jackson, Dizzy Gillespie, and Stevie Wonder, just to name a few. Also known for his many bass instruction books, Bunny Brunel designed for Gibson in 1986, for Carvin in 1992 (for several years); and since 2015 he has been designing basses for ESP (the Bunny Brunel LTD Signature Series). Brunel is also one of the few famous bass players alive who conceived, designed, and constructed his own electric upright bass—the Bunny Brunel Electric Upright Bass (BBEUB). Brunel has put out countless solo albums and is the founding member of the Grammy-nominated fusion band “CAB" (co-founded with Tony MacAlpine, and Dennis Chambers). He is also a founding member of iNow, a new group with Patrick Moraz (Yes, Moody Blues) and Virgil Donati. Brunel is a rare musician, making his bass sing. A melodic writer, he creates memorable, melodic overtones, fused with modal changes and dexterous playing. Hearing his music transcends most recordings from the fusion genre simply because even after listening and being blown away by the execution and profound changes—as complex as his music is—you walk away humming his melodies. Experiencing Bunny Brunel live in concert is transformative as well as spiritual. Nothing compares to the auditory, sensory fulfillment when you drink in a performance by this masterful bass sorcerer!

Multi-Grammy Award winner Stanley Clarke is undoubtedly one of the most celebrated acoustic and electric bass players in the world. What’s more, he is equally gifted as a recording artist, performer, composer, conductor, arranger, producer, and film score composer. A true pioneer in jazz and jazz-fusion, Clarke is particularly known for his ferocious bass dexterity and consummate musicality. Clarke’s creativity has been recognized and rewarded in every way imaginable: gold and platinum records, Grammy Awards, Emmy nominations, virtually every readers and critics poll in existence, and more. He was Rolling Stone’s very first Jazzman of the Year and bassist winner of Playboy’s Music Award for ten straight years. Clarke was honored with Bass Player Magazine’s Lifetime Achievement Award and is a member of Guitar Player Magazine’s “Gallery of Greats.” In 2004 he was featured in Los Angeles Magazine as one of the Top 50 Most Influential People. He was honored with the key to the city of Philadelphia, a Doctorate from Philadelphia’s University of the Arts and put his hands in cement as a 1999 inductee into Hollywood’s “Rock Walk.” In 2011 he was honored with the highly prestigious Miles Davis Award at the Montreal Jazz Festival for his entire body of work. Clarke won the 2013 and 2014 Downbeat Magazine’s Reader’s and Critic’s Poll for Best Electric Bass Player. Leading the bass liberation movement, Clarke envisioned the bass as a viable, melodic, solo instrument positioned at the front of the stage rather than in a background role; and he was uniquely qualified to take it there. A pioneer at 25, he became the first jazz-fusion bassist in history to headline tours, sell out shows worldwide, and craft albums that achieved gold status.