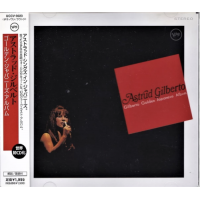 slideshow
In 1969, Verve released the label's last three albums by singer Astrud Gilberto. The first two were I Haven't Got Anything Better to Do and September 17, 1969. Al Gorgoni arranged the former and all of the latter except for Let's Have The Morning After (Instead of the Night Before), which was arranged by Michael Leonard. The two albums were recorded in New York—the former in February and the latter in September and November. Both albums are sensual and the song choices are offbeat and fabulous. They take a few listens to hear the beauty, since they are sightly unusual for Gilberto.

In between these two albums, Gilberto was in Tokyo and recorded one of her least-known and rarest albums—Gilberto Golden in Japan. Released only in Japan, Gilberto sang all 12 tracks in Japanese backed by an orchestra arranged and conducted by Sadao Watanabe. The songs are Street Samba; I Love Old Love; You, I and Love; White Waves; Love and Grief; Cupid's Song; The Girl From Ipanema; Mas Que Nada; La Chanson D'Orphee; A Man and a Woman; Live for Life and The Shadow of Your Smile.

Whether or not you understand Japanese, the music is beautiful and soothing. Gilberto's Japanese sounds great, even though she was likely reading from phonetic lyric sheets. Her vocals have a delicate, powdery softness and kitten-like quality here, while the arrangements are strong but not overpowering. Among the highlights are White Waves, Street Samba, The Girl From Ipanema, Mas Que Nada, A Man and a Woman, Live for Life and The Shadow of Your Smile.

Unfortunately the album's liner notes are all in Japanese. And no, this album wasn't the first time Gilberto recorded in a language other than Portuguese or English. In 1968 she recorded Canta in Italiano, which included a few Italian singles backed by Walter Wanderley.

Here's I Haven't Got Anything Better to Do...