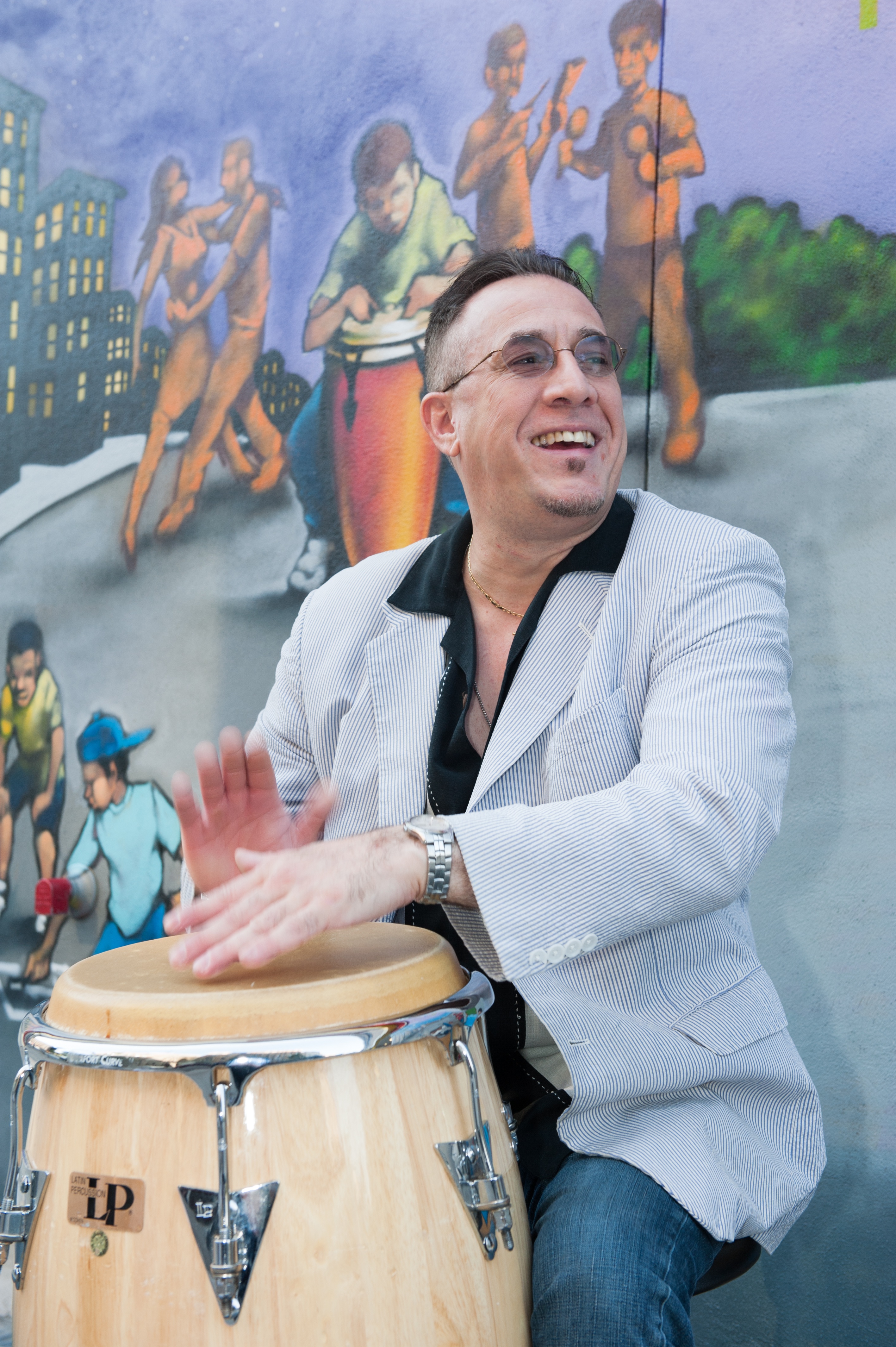 slideshow
Bobby Sanabria and the Manhattan School of Music Afro-Cuban Jazz Orchestra will be presenting a 90th Birthday Celebration honoring Candido Camero, NEA Jazz Master and the “father of modern conga drumming" on Friday, April 1 at 7:30pm in the School's John C. Borden Auditorium. The evening will feature Candido, who officially turns 90 on April 22nd, as guest artist. Showcased will be music spanning the living legend's career beginning with music from his Cuban childhood, followed by music from his early NYC years, where he worked with prolific music figures such as Machito and The Afro-Cubans, Mario Bauza, Tito Puente, Dizzy Gillespie and Bobby Sanabria. Candido has been a special guest artist of Bobby Sanabria and the MSM Afro-Cuban Jazz Orchestra on numerous occasions.

On April 1, 2008 they gave the historic performance celebrating the 50th anniversary concert showcasing the 1957 Jazz Masterwork, “Kenya" by Machito and The Afro-Cubans. This concert was later released in 2009 as the Grammy-nominated CD, Kenya Revisited Live !!!! on the Jazzheads label.

Candido Camero, Latin Percussion's Elder Statesman who is still known for his 'sure conga touch, his solid time, and unique sound that is all his own.' His execution is as nimble as that of a man half his age. Born on April 22, 1921 in the Havana, Cuba barrio called El Cerro, Candido was initially a multi-instrumentalist, showing facility on bongo, tres, guitar and bass, these being key instruments in the popular “son" music of the day. A permanent switch to bongos and congas led to work with some of the most famous son groups in Cuba including Chano Pozo's famed Conjunto Azul, the CMQ Radio Orchestra and a residency at the famed Cabaret Tropicana. His move to New York City in 1946 with the dance team of Carmen and Rolando made him the first in a wave of master conga drummers that would subsequently come to NYC. This put him in high demand and he soon began working with the premiere jazz and Latin artists of the day, including Charlie Parker, Dizzy Gillespie, Machito and The Afro-Cubans, Tito Puente, Billy Taylor, and others. Heralded as the father of modern conga drumming, Candido was the first to develop the techniques for one person to play two congas and later three simultaneously. His playing became distinctive owing to a tendency to tune, when possible, to the key of the song. Equipped with three congas and a bongo, he was able to complement the horn, piano and bass lines with harmonic contributions. In fact, there isn't a conga drummer today that doesn't use the technique developed by Candido in the 1940's.

Further recognition came in 1954, when Candido joined the Stan Kenton Big Band and toured coast to coast. He became a familiar figure on television appearing with Tommy Dorsey, Patti Page, Tony Bennett, Tito Puente, and others. His long list of recorded work numbers well over one thousand. Candido still tours and performs today, and continues to work in NYC's studio scene as a first call player for jingles, record dates and film work. In January 2008 he was named a Jazz Master by the National Endowment for the Arts.

Tickets, priced at $5, are required for MSM Afro-Cuban Jazz Orchestra concerts. Manhattan School of Music is located at the northwest corner of 122nd Street and Broadway, and is accessible by public transportation. The Manhattan School of Music Concert Office is open Monday, Wednesday, and Friday from 10:00am to 5:00pm, Tuesday and Thursday from 10:00am to 6:00pm, and one hour before curtain for ticketed events. For information call 917 493 4428 or visit www.msmnyc.edu.

Bobby Sanabria: The Multiple Grammy nominated drummer, percussionist, composer, arranger, conductor, producer, educator, film-maker, bandleader, and multi-cultural warrior, has performed and recorded with such legends as Dizzy Gillespie, Tito Puente, Mongo Santamaria, Paquito D'Rivera, Ray Barretto, Candido, Henry Threadgill, Larry Harlow, and Afro-Cuban jazz Godfather Mario Bauza. His first solo recording, N.Y.C. Ache has been become a cult classic. His first big band recording, Live & in Clave!!!, was nominated for a mainstream Grammy in 2001. In 2003 he was nominated for a Latin Grammy for 50 Years of Mambo, A Tribute to Damaso Perez Prado. His 2005 Quarteto Ache disc was hailed by the critics as giving a new vision to the standard jazz quartet. The readers of DRUM! magazine named him Percussionist of the Year in 2006.

This South Bronx native of Puerto Rican parentage is a 2006 inductee into the Bronx Walk of Fame where he has a street named after him. His 2009 CD Kenya Revisited Live!!! is a re-imagining of the legendary Kenya album by the Machito Afro Cubans with incredible new arrangements with Bobby conducting the Manhattan School of Music Afro-Cuban Jazz Orchestra that has astounded critics and fans and was nominated for a Latin Grammy for Best Latin Jazz recording. He on the faculty of MSM and the New School. He leads his own Quarteto Ache, nonet Ascension, and his multiple Grammy nominated big band. He was associate producer of the TV documentaries The Palladium: Where Mambo Was King and From Mambo to Hip Hop. Mr. Sanabria is featured in the documentary LATIN MUSIC USA, which aired on PBS in October 2009.

The MSM Afro-Cuban Jazz Orchestra, has reached international acclaim playing at prestigious jazz conferences and by their critically acclaimed Grammy-nominated 2009 recording, Kenya Revisited Live !!!. This recording released on the Jazzheads label, is from a historic 2008 concert held at MSM that celebrated the 50th anniversary of Machito & The Afro-Cubans 1957 Jazz Masterwork, Kenya, and also features NEA Jazz Master and living legend Candido. The MSM Afro-Cuban Jazz Orchestra, now in its eleventh year under the direction of Bobby Sanabria, has performed in such NYC jazz venues as Birdland, the Jazz Standard, [email protected] Center's Dizzy's Club Coca-Cola, as well as on the plaza of the Harlem State Office Building, at 125th Street, in an outdoor concert celebrating MSM's 90th anniversary. They have performed with a who's who of jazz greats from Tom Harrell to David Sanchez to Sonny Fortune and Ray Barretto, among others. The MSM Jazz Orchestra and Bobby Sanabria are dedicated to performing the music of 'la tradition' and pays homage to these legends while continuing to pass on and advance the tradition to the next generation.