Grammy-nominated drummer, percussionist, composer, arranger, conductor, producer, educator, and bandleader Bobby Sanabria is a major advocate for Latin jazz education and justice for those musicians who play under its banner. He is also a major force for musical education and economic development in the South Bronx, is a lecturer at Jazz at Lincoln Center and hosts the Latin Jazz Cruise radio program on WBGO 88.3FM in Newark, NJ. All About Jazz: You grew up in the Bronx, right? ...

In 2018, Leonard Bernstein would have been 100 years old, generating renewed interest in his work. His compositions, especially those from West Side Story continue to inspire many fine jazz performances with their beautiful melodies, compelling rhythms, and unique harmony. 100th birthday tributes by Bobby Sanabria & the Multiverse Big Band and, on the other end of the spectrum, Joe Policastro and Ted Nash in trio settings plus more jazz responses to the Maestro -in this hour of Jazz at ...

William Shakespeare's epic tragedy Romeo and Juliet made a huge splash when it reached Broadway in 1957 in the guise of West Side Story, in which the warring Montagues and Capulets were replaced by New York City street gangs, the Italian-American Jets and Puerto Rican Sharks. The newer version, with book by Arthur Laurents, music by Leonard Bernstein and lyrics by Stephen Sondheim, ran for 732 performances before going on tour and has been performed in theatres across the country ...

read more
6
In the Artist's Own Words

West Side Story holds a special place in my heart. I first saw the movie as a young boy when my parents José and Juanita took me and my sister Joanne to the luxurious Loews Paradise on the Grand Concourse in my hometown Da' Bronx in celebration of the film's 10th anniversary. At that time there wasn't anything that acknowledged the contributions we had made, let alone the existence of NYC's Puerto Rican community, other than articles about gangs and crime ...

A scintillating evening of Latin jazz with a novel twist was the order of business Monday, March 26, 2018 at Dizzy's Club Coca-Cola. Bobby Sanabria, the director of The Manhattan School of Music Afro-Cuban Jazz Band, has conducted superlative shows at Dizzy's in the past, but this one had a packed audience chatting up laudable encomiums long after the opening set had concluded. The program “Cartoon and TV Music Goes Latin Jazz!!!" featured the theme music from ...

Drummer, percussionist, composer, educator, Bobby Sanabria has gained renown and respect from fans and musicians alike as one of the foremost proponents of what is labeled Afro-Cuban/Latin Jazz. Born and raised in the South Bronx, Sanabria performed with a veritable Who's Who in the world of jazz and Latin music, as well as with his own critically acclaimed ensembles. His diverse recording and performing experience includes work with such legendary figures as Dizzy Gillespie, Mario Bauzá, Tito Puente, Paquito D'Rivera,, ... 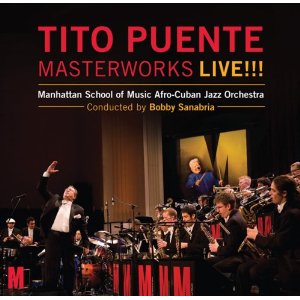 The spirit of Tito Puente comes alive with a riveting live concert, wonderfully recorded, on Tito Puente Masterworks Live!!!. Percussionist Bobby Sanabria fires up the exceptionally talented Manhattan School of Music Afro-Cuban Jazz Orchestra in an energetic performance, just as he did on Kenya Revisited Live!!! (Jazzheads, 2009), this time showing maestro Puente's depth, majesty, complexity and artistry. Two distinguishing features of this concert are its stylistic variety, and the new arrangements or reconstructions--still recognizable and true to ...