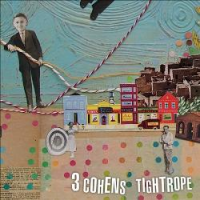 slideshow
To be released Oct. 22, 2013, via Anzic Records, “Tightrope" features the 3 Cohens improvising as an a cappella horn choir and teaming with special guests Fred Hersch, Christian McBride & Jonathan Blake

“To the ranks of the Heaths of Philadelphia, the Joneses of Detroit and the Marsalises of New Orleans, fans can now add the 3 Cohens of Tel Aviv." - All About Jazz

One of the reasons jazz improvisation excites performer and listener alike is that it's akin to walking a tightrope - chances are taken, stakes are high. A musician can create thrilling, in-the-moment art, or fall flat. Collective improvisation ups the ante - it's never a given that multiple players can be so attuned to one another that they know when to listen as well as when to speak. The 3 Cohens - siblings Anat Cohen (clarinets, tenor saxophone), Avishai Cohen (trumpet) and Yuval Cohen (soprano sax) - explore this concept fully on Tightrope, their fourth extraordinary album together, to be released October 22, 2013, via Anzic Records. The material ranges from free improvisations and fresh originals to classics by Duke Ellington, Thelonious Monk, Tadd Dameron, Art Farmer and Gerry Mulligan, plus tunes associated with Joao Gilberto and Jo Stafford.

Most of the tracks on Tightrope see the three horn players walking that fine titular line without a net - performing a cappella, with no chordal instrument or rhythm section for support; moreover, they venture a sequence of “Conversations" as unaccompanied free improvisations, spontaneously composing the music in interplay - an evolutionary development for the group. But when they're not going it alone on Tightrope, the 3 Cohens are adding a special guest to the mix, with pianist Fred Hersch, bassist Christian McBride and drummer Johnathan Blake each appearing to make the 3 Cohens a quartet on several tracks. “We treat our horns as voices, so we call it playing a cappella when it's just the three of us," Anat says. “But even though we wanted to do an a cappella album, we couldn't resist having a few guests, musicians we really love - Fred, Christian and Jonathan." Yuval adds: “Sometimes people say, `Why were your parents so lazy - why did they stop at three? You could've had a rhythm section..."

In a recent video interview (3 Cohens - Tightrope EPK), the 3 Cohens talked about Tightrope in this way, finishing each other's sentences and playing music from the album. Anat says: “When you play the saxophone or the trumpet in jazz with a rhythm section, you're almost always the soloist. But when you're playing as we are here most of the time, with just the three horns, you're also an accompanist. So on this album, we're playing both roles, of soloist and accompanist." Avishai adds: “And the roles can change in a second, based on what the other is doing... But we know each other so well - we can feel what the other is thinking."Yuval points out that in the trio improvisations of Tightrope, “It's a constant dialogue with yourself, your own ego - to be concerned just with what the music needs." As The Boston Globe observed about the band: “The 3 Cohens have forged a sumptuous group sound built upon a selfless love of blending their instrumental voices."

The sound of intertwined horns was in the ears of all three Cohens early on. A common inspiration growing up in Israel was a 1959 album by the piano-less Gerry Mulligan Quartet featuring Art Farmer, with the brothers and sister naturally drawn to its melody-oriented weave. Tightrope includes two tunes from that band's book: Farmer's “Blueport" and Mulligan's “Festive Minor." There are other pieces from the Cohens' youth. “Ai Li Lu Li Lu" is a Yiddish lullaby their mother sang to them. The standard “Indiana" underscores their love of Louis Armstrong and the collective improvisation from New Orleans, while Tadd Dameron's “Hot House" reflects their ties to the bebop tradition. Even the free “Conversations" - spurred by little more than “why don't you start" or “let's think long tones" - have their echoes, as the pure polyphony and quotes from Prokofiev, Mussorgsky, etc. evoke the siblings' early experience in classical ensembles.

As for the quartet tracks on Tightrope, pianist Fred Hersch joined the 3 Cohens in the studio straight from the airport, teaming with the siblings for his “Song Without Words #4: Duet" (a piece that both Anat and Avishai had performed on stage with him). With Hersch, they also recorded the Italian ballad “Estaté" made popular in the jazz realm by João Gilberto; and, at the pianist's suggestion, they captured a playfully baroque version of Thelonious Monk's “I Mean You." Bassist Christian McBride dropped by the sessions for a spontaneous take on Duke Ellington's “Just Squeeze Me," his woody tone a delightful addition. Drummer Jonathan Blake has played for years live in the 3 Cohens Sextet, and his studio visit yielded a quartet version of Avishai's grooving original “Black."

Avishai goes lyrically solo for the ballad “There's No You" (an early hit for Jo Stafford), and the three-horn choir voices Yuval's “It Might as Well," a piece inspired by Rodgers & Hammerstein's “It Might as Well Be Spring." For Avishai's closing “Mantra," Anat adds dark hues on bass clarinet. Throughout Tightrope, the filial “telepathy" among the 3 Cohens is a marvel but so is the beauty of sound each conveys on his or her instrument. This is an album about balance and buoyancy - and the sheer joy of communicating through music.

The best jazz groups are made up of kindred spirits, but the rare family band has something more - an intuitive feel for each other that goes beyond words and gestures. The 3 Cohens are that sort of uncommon collective, a trio of siblings from Tel Aviv, Israel, whose sense of improvisational interplay is both uncannily fluent and wonderfully, infectiously warm. Along with performing on stages the world over, the 3 Cohens have three previous studio albums to their credit: One (2004), Braid (2007) and Family (2011). The new album, Tightrope, underscores the fact that there is something special about the music the three make together, even with the individual careers each of the Cohens pursue to increasing international success - Anat with her string of hit albums (including 2012's Claroscuro), Avishai with his hot Triveni and Third World Love bands, and Yuval with his recent Song Without Words release and his status as an award-winning educator in Israel.

All About Jazz, reviewing One, said: “What gives the 3 Cohens a certain edge is the simpatico they share, extending beyond merely being siblings; it involves all three sharing the common bond of music from an early age, and the kind of comfort level and intuition that can only come from playing together for many years... Throughout, a joyfulness pervades these performances." All About Jazz was again full of enthusiasm about Braid, pointing out how the threesome's “inside jokes, finishing of each others' sentences and playful sibling rivalries spur the ensemble to refined heights... The sextet offers fresh, modern jazz full of energy, daring and emotion." The New York Times also enthused over the group's “family sound" and “intuitive counterpoint" before pointing out the players' individual qualities: “Anat has emerged as one of the best clarinet players in jazz, with a warm and singing tone; Avishai can play bebop and ballad lines and outer-limit trumpet sounds with tireless fluency; and Yuval has a full and relaxed sound on soprano."

Upon the release of Family, the 3 Cohens were featured on the cover of DownBeat Magazine. The article depicted the character of the group this way: “Chemistry. Alchemy. Telepathy. All are appropriate words to describe the otherworldly quality of improvisation by a band with longstanding personnel credentials... There's something special at work - a new level of anticipation and celebration. Witness the joyful - and at times, whimsical and intimate - conversations and interweaving horn textures."