2012 Lakeshore Jazz Series at Tempe Center for the Arts 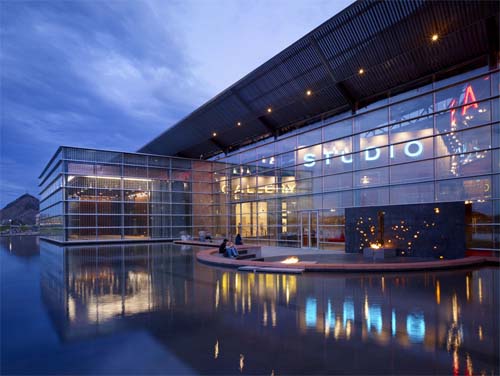 An alumni of the Thelonious Monk Institute, Parlato has been turning heads ever since she won the 2004 Thelonious Monk Institute International Vocal Competition with which she displayed a musical individuality loaded with paradoxical powers. Her sultry, intriguing voice and unique, rhythmically agile phrasing came with inescapable centripetal force; the more intimate and understated she sang, the more she drew listeners in. Since then she has toured worldwide to sold out audiences with BBC Radio proclaiming, “Star over London...A star is born!"

A perpetual student of the history of Jazz piano, Benny Green mentions Art Tatum, Erroll Garner, Hank Jones, Ahmad Jamal, Phineas Newborn, Bud Powell and Oscar Peterson as some of his main influences. His approach to Jazz can be resumed in his own words: ..." for myself and a lot of musicians I admire, the main focus is to just swing and have fun, and share those feelings with the audience ... and, if I'm able to convey that, then I feel like I'm doing something positive."

Multi-GRAMMY® Award nominee, Brazilian pianist/singer/composer/arranger Eliane Elias is known for her distinctive and immediately recognizable musical style which blends her Brazilian roots, her sensuous, alluring voice with her impressive compositional and piano skills. All her recordings went top five on Billboard and top five on the radio charts in the U.S., with many reaching number one. In Japan, four of Eliane's recordings received the Gold Disc Award from Swing Journal, (including consecutively her last three releases). Her 2007 release, Something for You, received the Best Vocal Album of the Year Award in Japan.

New York-based jazz trombonist Conrad Herwig is considered one of the world's complete jazz musicians, atop both the performing and jazz educational fields with an abundance of composer and arranger credits, as well. To date, he has released 20 recordings as a leader in addition to contributing to nearly 200 other recording sessions with some of the most notable artists in jazz. Young Sounds of Arizona was founded in 1971 to provide further training, performing opportunities and artistic growth for young Valley musicians ages 14 to 19. Sponsored by the Professional Musicians of Arizona, Local 586 of the American Federation of Musicians, Young Sounds members are chosen by audition of middle-school and high school age students each year.

With her lustrous voice and soulful delivery, Clairdee hearkens back to a time when jazz, pop, and rhythm and blues often blended seamlessly together. Combining scene-stealing charisma with heartfelt humility and a sincere belief in the transformative power of music, Clairdee has honed a repertoire of standards set to state of the art arrangements that are equally smart and entertaining.

This rising star is the hottest new jazz pianist on the West Coast. And he sings in a style reminiscent of the late jazz trumpet legend, Chet Baker. Proulx's most recent album is titled Baker's Dozen, and it's an extraordinary retrospective on Chet Baker. His band features some of the top session musicians in Los Angeles.

Jazz vocalist Lorraine Feather and pianist Shelly Berg. Lorraine Feather is the daughter of Leonard Feather, the late jazz writer. She is a gifted lyricist, and is known for her full-bodied, traditional vocal style. Shelly Berg is one of the most notable jazz pianists on the scene today, and he's the Dean of Music at the University of Miami. Shelly is known for his collaborations with jazz vocalists. He has performed, recorded and arranged for Patti Austin, Nancy Wilson, Bobby McFerrin, Kurt Elling, Dionne Warwick, Tierney Sutton and others. Lorraine and Shelly are backed up by our TCA All Stars.

Its name derived from creation mythology found in Native American Folklore, the Turtle Island Quartet, since its inception in 1985, has been a singular force in the creation of bold, new trends in chamber music for strings. Winner of the 2006 and most recently, the 2008 Grammy Award for Best Classical Crossover Album, Turtle Island fuses the classical quartet esthetic with contemporary American musical styles, and by devising a performance practice that honors both, the state of the art has inevitably been redefined. For the past 17 years, Sutton has fronted the Tierney Sutton Band featuring pianist Christian Jacob, bassists Trey Henry and Kevin Axt, and drummer Ray Brinker. Since 1998, Tierney has recorded nine top jazz albums, including the 2009 Grammy nominated CD, Desire, and the band's most recent release, American Road. Tierney has also been performing in a trio format with flautist Hubert Laws and guitarist Larry Koonse.

Critically Acclaimed Jazz Singer Denise Donatelli Celebrated the Launch of 2011 With Two Grammy® Nominations for her 2010 Savant release, When Lights are Low for Best Jazz Vocal Album and pianist/producer/arranger, Geoffrey Keezer for his arrangement of “Don´t Explain" in the Best Instrumental Arrangement Accompanying a Vocalist category. She has performed with a long list of jazz luminaries and has been featured with the Stan Kenton Alumni Orchestra.

Leader and pianist Bob Ravenscroft has long been a man in pursuit of sonic perfection. His family literally has music in its blood, traceable all the way back to Thomas Ravenscroft, composer of the Whole Booke of Psalms in 1621. Four centuries later, Bob continues to bring a spiritual element and meditative reverence for the environment to his music, but he draws upon an extensive jazz writing, arranging and performing background to create “live" compositions, enabling his audiences to virtually become part of the creative process.

In May of 2008, with help from local sponsors, JAMN Jazz expanded to the Tempe Center for the Arts (TCA) with an experimental jazz series in the Southwest's newest performing arts center. From May to October, 2008, JAMN Jazz produced six hard ticket events featuring virtuoso jazz artists such as Marcus Printup, Judy Roberts, Greg Fishman, Benny Green, Jesse McGuire, Conrad Herwig, Dennis Rowland and others. The JAMN Jazz @ TCA series generated extensive press coverage and created an audience for jazz events at TCA.

With a growing jazz audience, and added sponsorship from both private and community donors, LSP continued its extensive programming at the TCA throughout 2009 and 2010. To date, LSP has presented more than 28 concerts featuring some of the world's most notable jazz artists.

In 2010, Lakeshore Music, Inc. was created as a non-profit corporation to not only present world-class jazz programming at the TCA, but to provide innovative workshops and master classes opportunities for promising middle and high school music students throughout the community.