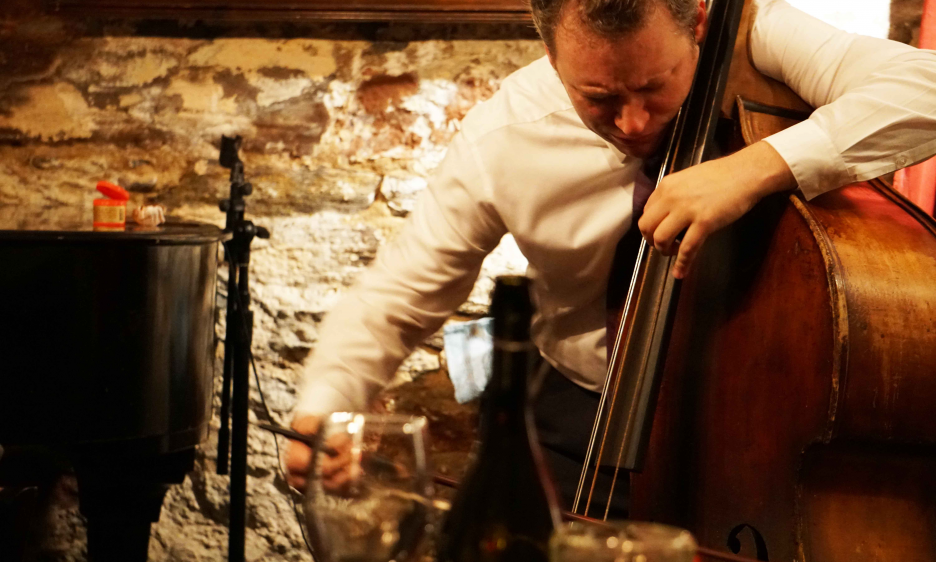 By Martin McFie
November 4, 2018
Sign in to view read count
On West 44th street in midtown Manhattan, Johnny Valenti recently inaugurated the new Birdland Theater, which has been built downstairs, below his Birdland club. The seating is arranged with two chairs at each round table, the rearmost of which are high tops, ensuring a clear view of the well lit stage from every table in the room. The sound system is crystal clear and sharp completing this top quality live jazz venue which is decorated in hotel chic style.

On October 21st, 2018 two Yamaha pianos dominated the slightly raised stage waiting for Bill Charlap and his wife Renee Rosnes to appear through the backdrop curtain, which separates the stage from the green room, dressing rooms and offices beyond. Charlap and Rosnes played in their ultra-sophisticated style, the enchanting looks, smiles and glances of communication between them making the music flow and sparkle with brilliance. They played the pianos acoustically with the lids off, as Charlap's heel tapped out the rhythm loudly on the polished wooden stage, when his foot wasn't on the sustain pedal. Through the whole performance the intensity and volume of the music was steadily increased from the Burton Lane tune "Old Devil Moon" to Dizzy Gillespie's "Night in Tunisia" As an aside, it would have been Gillespie's birthday on that same day. On they went to Oscar Hammerstein and Jerome Kern's "The last time I saw Paris" and won a standing ovation from the audience, who were clearly aficionados of the Charlaps' music.

Later in Greenwich Village, Smalls was full but pianist and owner Spike Wilner's addition to the New York scene in 2014, Mezzrow, is across 7th Avenue, still on West 10th Street. They had one table open. This old-style jazz cellar joint is down a short iron staircase into a bar with a listening room beyond. It's like taking a step back into the 1960s, all except for the cigarette smoke which typically hung from the ceilings of jazz clubs back then. The walls are rough brick and stone painted white. The club is a long, narrow and intimate cellar space named for the famous clarinetist Mezz Mezzrow. For complete authenticity, the subway regularly thundered in the background as trains passed. Best suited for a duo or maybe a trio, space is tight with no room for a stage, but a Steinway 'A' piano was tight against one wall.

The Mezzrow audience was young and attentive to the guitar of Pasquale Grasso and the quite exceptional stand-up bass of Ari Roland. Playing in arco and swinging the bass hard, his bow made the strings buzz and hum with energy. Past shades of Jimmy Blanton came to mind. Roland was walking the bass line with single finger attack and leaving open strings to free his left hand to move easily around. In arco this was the bass being played as the deep and melodic instrument it can be, instead of being limited by pizzicato to the bass line and keeping time. The bow is clearly more demanding for a bassist, the stand up bass is a physically big instrument to dance with and switching roles between melody and rhythm calls for some slick work dropping the bow back into the quiver. They played a fast "Just one of Those Things" which stretched Roland to deliver a stunning solo.

The next evening, October 22nd, saw a return to the Birdland Theatre where the two Yamaha pianos were again waiting, saving piano moves by some careful scheduling. For the past 70 years, every jazz legend of the modern era has played Birdland which is named for Charlie Parker. The story goes that Parker's tour bus hit a wandering chicken or yardbird. In an erratic moment, Parker insisted they stop to collect the roadkill, which won him his nickname, Bird. Birdland has been keeping the history and spirit of jazz alive through three reincarnations on 52nd, 105th and now West 44th streets, the location changes being largely driven by high rents in Manhattan. The evening performance was a dinner benefit celebrating The University of Michigan's Gershwin Initiative by featuring the Jack Lewin production of "Here to Stay" with Champian Fulton and John Proulx on the two pianos, the preview performance of which at The Jazz Corner, Hilton Head SC. was previously reported 21st October, 2018

At the behest of the Gershwin family, The Gershwin Initiative is researching the original one hundred year old scores and manuscripts to refresh our collective understanding of George and Ira's huge body of music for Orchestra, Opera and Broadway. At this special fundraising performance, The Gershwin Initiative announced it will celebrate their research project by producing the Gershwin opera "Porgy and Bess" at the Met in New York City next year. Researching this unique archive of American music is truly important work, which we can all value and support.