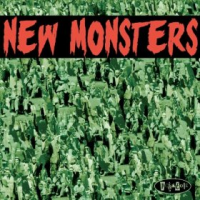 Despite the suggestion of the title, New Monsters is not actually crawling with legions of denizens from the netherworld. The promise of monsters has more to do with the unleashing of musical forces as diverse as klezmer and Erik Satie. Moreover, far from being a quaint experiment, the album takes a radical road—one that was travelled by Don Byron on Plays the Music of Mickey Katz (Electra, 1993). Whether the influence is direct is a moot point, but the bassist and leader of this ensemble, Steve Horowitz, has certainly heard his Byron and heard it well, as evidenced by his bold attempt at musical iconoclasm. The voice of the bassist is singular and authentic, and it comes through clearly from one brilliant arrangement to the next.

Horowitz is an edgy bassist. His stuttering legato is peppered with an unusual choice of notes that inhabit the very edge of the counterpoint he creates with tenor saxophonist Dan Plonsey. Although there are many electrifying examples of this, one that stands out is the superb arrangement of saxophonist John Coltrane's minor intrusion, "India." This colossal wall of sound, once directed by reed multi-instrumentalist Eric Dolphy, gets an exquisite remake. While the density of the piece is retained, the melodic and harmonic lines become superbly blurred; there is a feeling that Horowitz has infused it with something saxophonist Ornette Coleman would surely have called "Harmolodic" invention. The same holds true of Dolphy's "The Red Planet," which is a part of the medley tagged onto "India."

There is a strange calm that pervades the album that is quite unnerving, like a crepuscular menace that seems to lurk behind the music. This is probably wholly intentional, and has much to do with the tenor saxophone of Dan Plonsey, the composer of all the original charts on the session. Plonsey has a deep, hollow sound inside which his voice echoes and resonates as if it were emerging hoarsely from an icy cave where the spirits of the denizens lurk. His chart, "New Monsters," is brilliant in that respect, and is full of fear and loathing. "Miracle Melancholy" has a similar feel, the eeriness compounded by an ascending whine created by brushing the piano strings so that they wail and howl with the flute. This goes on as bells are rung, before the song crescendos in thundering drums and bass.

When dissonant music is impressionistically created on New Monsters, it suggests that the music is emerging from an ancient well where death lurks in "Shattered Silence" and zombies feast on "Brains for Breakfast." This may appear to be quite the menu for an album where improvisation of the finest kind is the order of the day, but this is to be expected from musicians so well-schooled in their instruments, the history of music, and in the sublime ability to create music that is memorable every step of the way.