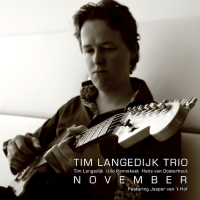 Langedijk's contemporary compositions not only have a strong melodic sensibility; they also showcase his harmonic concepts. The haunting "Pathway" is a prime example of his craft, the melody circling round to create an irresistible motif. Langedijk's playing is assured, his sense of time and space giving the composition its soul. With subtle and empathic accompaniment from van Oosterhout and Pannekeet, this becomes the standout track.

The introspective "Parameshwari" has a lyrical quality that Langedijk unfurls on an acoustic guitar. He infuses an incipient beauty that is impressive in its fluency. The mood also draws an incandescent performance from van 't Hof, who is an exceptional conceptualist with an uncanny sense for development.

The blues jump and grind out of the happy "Grid Blues," as Langedijk bends his strings, adds a whiff of country music, and rides out in a welter of cutting edge inventions. Pannekeet lets his bass sing while Oosterhout adds a myriad of bright colors. His country side comes out strong on "I'll Fly Home" where he plays deep into the melody and gives it a striking presence.

Pannekeet's "Condens" is looser in structure and the explorations on the guitar are fragmentary, yet cohesive in their logic. van 't Hof changes the mood in a scintillating rush of marvelous ideas that elevate the sensibility of the tune. Langedijk comes back to dance on the edge of funk before cutting loose and deeply graining the groove.

November is an impressive performance from an artist who has plenty going for him.