Roy Nathanson: Nearness And You, Duets and Improvisations 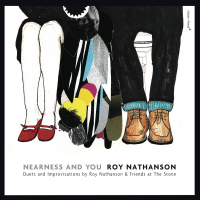 On saxophonist Roy Nathanson's 2009 disc Subway Moon (Yellowbird), he covers the R&B song "Love Train" a huge hit for The O'Jays in 1973. Nathanson's version was a relaxed take on the age old wish for world peace. By decelerating the music he accelerated the intimacy. He utilizes the same device on Nearness Of You, an album of duets and improvisations recorded with his friends and longtime playing partners during his 2015 residency at The Stone in New York.

Nathanson was a key player in the Downtown scene of the 1980s and 90s, performing with John Lurie's Lounge Lizards, Marc Ribot's Rootless Cosmopolitans, and in The Jazz Passengers, an outfit he founded with trombonist Curtis Fowlkes. With humor as his muse, he has charted a course of musicianship that pairs vaudeville with modern jazz. His most recent ensemble, Sotto Voce, has released three discs. The latest being Complicated Day (Enja, 2014), which combines text (often his poetry) with music.

The same intimacy permeates these duets. Reunited with Fowlkes, they mine some Jazz Passengers music with "Indian Club," picking up on their dialogue of the past thirty years. Saxophone and trombone call-and-respond, tangle-and-untangle. They move onto the theme of the session, Hoagy Carmichael's "The Nearness of You." Nathanson blows two saxophones over the trombone, before he moves to piano and Fowlkes sings (in sotto voce) the New Washington lyric. In true Nathanson form, the song title is transmogrified into "The Nearness Of Ewes," "The Nearness Of Youse," with Anthony Coleman "The Nearness Of Jews," and Myra Melford "The Nearness of You Too."

With each partner, there's a different sound. Pianist Arturo O'Farrell dresses Carla Bley's "Ida Lupino" as a melancholy gospel blues for Nathanson's alto to stretch and embellish. Marc Ribot's guitar acts as a deconstructing machine in their three improvised duos. "The Low Days" finds Nathanson on baritone saxophone rounding out the sharp edges Ribot produces. For many, the highlights here are the two pieces he performs with pianist Myra Melford. One, a tangled improvisation "What? Shoes?" and the other a lamenting cover version of "The Nearness Of You Too." Both pieces jump, skitter, and bounce notes between the players performing a stone's throw away from each other. The proximity is you.