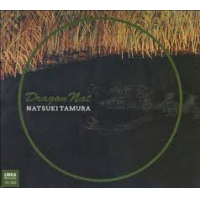 The instrumentalist begins his career as, essentially, a solo artist. Whether is practicing long tones or scales or drum rudiments, nearly everyone who plays a musical instrument starts out unaccompanied. On the road to mastery, most musicians spend thousands of hours playing alone. In jazz, solo recordings by musicians other than pianists or guitarists are a relatively recent phenomenon, and the prospect of listening to a horn or drum soloist playing unaccompanied for an hour or more may seem daunting, both the the player and to the audience. To the listener, a solo performance may seem dry or arcane; after all we're used to experiencing music as an interaction between several players. Daunting to the performer because-despite having spent so much time playing alone-he must lay his artistry bare for all to witness. There's no hiding anything, whether it's a missed note, or a lack of inspiration, or a one-dimensional playing style.

Trumpeter Natsuki Tamura, already recognized worldwide as a visionary composer and improvisor from his work with his musical and life partner Satoko Fujii, is also an experienced solo performer. Dragon Nat, his third unaccompanied recording, and his first in 10 years since Ko Ko Ko Ke (Natsat Records, 2004). From the first moments of the opening track, "Shiro," it's quite apparent that Tamura has given the idea of solo performance a great deal of thought. Also, it's interesting to hear re-configured versions of pieces such as "Forever," and "In Berlin, In September," that Tamura's played with Gato Libre and in duet with Fujii. The most striking thing about Dragon Nat, is its simplicity and emotional directness. With a firm nod to the stripped-down, dark-hued, folk-inflected persona he adopts in his Gato Libre band, Tamura's improvisations on Dragon Nat develop organically from his lovingly-crafted, singable themes. For much of the album, Tamura plays with great lyricism and warmth. The themes and improvisations on "Forever," "World," and "Shiro" are all quite approachable, though somewhat melancholy in tone. That isn't to say he doesn't experiment here. Making little use of mutes and the other usual tricks of the trumpeter's trade, Tamura indulges in the sorts of things one would expect from an exciting, edgy player with heavy avant-garde cred. On the title track, he explores the very lowest registers possible on his instrument with little restraint and a great deal of wry humor. "Dialogue" has long stretches of breathy smears and high-register whirring sounds that suggest a desolate windswept landscape; these are interspersed with lovely melodic intervals that somehow increase the feeling of desolation. Tamura lightens the mood, however, with small percussion and game calls. On "Wunderbar," Tamura expands his palette further to include a bit of theatrical spoken-word. Here, his mostly sotto voce vocal musings-interspersed with the rattling and jingling of small percussion-impart a sense of performance art or musical theater. Throughout, he makes artful use of partially-valved tones and multiphonics to create a wide array of textures.

If an unaccompanied solo trumpet album seems like an audacious and bold move, Natsuki Tamura defies expectations by wholeheartedly embracing a low-key, personal approach on Dragon Nat. Rich in melody and muted drama, Tamura spins his brassy tales with the pacing and humanity of an expert storyteller.