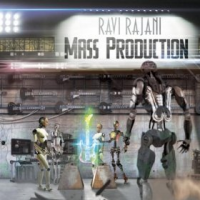 Despite the raucous opening rocky bluesy riff of "Weekend Blues" which seems to portend a set dominated by an electric guitar trio with the volume firmly fixed at eleven, beginnings can be deceptive. The second track "Snowball" starts to display some subtleties in composition and execution, especially in the quieter sections. By track three the listener expecting a session of Stratocaster blasters is confounded by Rajani's excellent take on Miles Davis' all-too rarely recorded "Nardis," here re-titled "Sidran" in 7/8 and in which the guitarist's mettle is displayed with full force and where lesser guitarists might fear to tread. Wah wah guitar introduces "The Change" a funky blues which increases in complexity as it progresses, but begins to betray Rajani's love of Jimi Hendrix when he briefly quotes from "Voodoo Chile."

The CD cover alone, depicting eerie skeletal robots might give the uninitiated listener the impression that this is a heavy metal album, and for jazz, it is indeed something of that order, oscillating at times somewhere between Jeff Beck and Allan Holdsworth, but there is more to it than merely metal. The title track "Mass Production" is an exciting, almost febrile outing, but with keyboards affording some respite to the full-on guitar. This is not to decry the metal element, which here works at a higher cerebral level than the more conventional shredding session. An interlude from all this electric excitement is found in the next track "Afternoon in London," a comparatively restrained paen to John Lewis' standard "Afternoon in Paris" with keyboards underpinning the elegant guitar lines of the main riff and deft soloing.

Following this intermission we are treated to the next, somewhat more overt nod to Hendrix with "Hey Jimi" an out-an-out but intensely effective blues in the "Red House" mode. An important point to note here is that Rajani is never tempted into any kind of vocal outing at any point on the album, a trap into which great guitarists have so often fallen. "Yellow Jacket" is a tribute to Russell Ferrante's jazz fusion group, which again follows the Hendrix line of power blues. "Fascination" demonstrates Rajani's ability to play in less common time signatures (here 9/8) which certainly adds to the fascination as does the unusual fade out at the end. The final track "Out and About" centres around a fast guitar riff which gives way to some compelling guitar soloing.

This first album by an unabashed metallist jazzer displays both rock driven raw energy and a sensitivity to jazzier conventions, a fine tightrope upon which to walk, perhaps, hopefully, the shape of things to come?