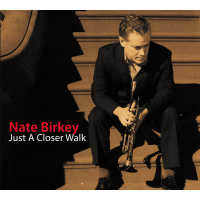 Nate Birkey is a fine New York-based trumpeter who traveled a biographical route from childhood in Colorado to Boston's Berklee School of Music, then to various parts of the West Coast, living and working in the Los Angeles area for a while, and finally settling into the big-time jazz scene in NYC a few years ago. His travels are important, for they formed the foundation for an understanding of the American spirit that infuses his playing. He has made nine albums thus far as a leader, and they each seem to reflect a theme of American life in different times and places, such as "Christmas," "The Mennonite," "Shortest Day" and "Almost Home." His playing is deeply informed with the whole history of jazz right up to the present. His style is quietly lyrical with a certain darkness that reflects the blues and can also be heard in Miles Davis and to some extent Chet Baker and Art Farmer.

This album, Just a Closer Walk is very interesting from a thematic standpoint. Birkey takes spiritual music, much of which smacks of the blues, and uses it to probe the roots of jazz as it emerged in New Orleans and the African American gospel churches. The album cover has Birkey sitting on the stoop of what looks like a Harlem brownstone such as the one that provided the backdrop of Art Kane's famous (1958) photo, "A Great Day in Harlem," with over fifty top players from Gerry Mulligan to Thelonious Monk, Mary Lou Williams, and Count Basie standing together with a bunch of black kids around them. This time it's just Birkey, holding his trumpet and looking down reflectively. Maybe he's asking himself, "What is jazz?" and looking for something fundamental to hold onto. So he goes back to the roots. That is what this album is all about.

To form his quintet for the album, Birkey returned to his old haunts in the L.A. area and hooked up with some of his musical partners there: Tom Buckner on tenor saxophone, Jamieson Trotter on piano; Jim Connolly on bass, and Peter Buck on drums. They recorded the session appropriately at a church in Isla Vista, California. The backing for Birkey is excellent and complements his blues/gospel emphasis. Buckner and Trotter provide comping, riffs, and solos that highlight the gospel flavor. Connolly and Buck provide steady, persuasive rhythm, sometimes resembling the New Orleans funeral marching bands where jazz began its slow climb through various incarnations to the avant-garde.

With the exception of "Cristo Redentor," a song composed by pianist Duke Pearson after he saw the famous statue by that name in Rio di Janeiro, the songs are all traditional from the hymn books and gospel choral repertoire. Some you'll hear at almost any church in America, and others will crop up in some backwoods church in the deep South. The title tune, "Just a Closer Walk with Thee," is a gospel song that the group does in rousing marching band fashion, and there you can hear the origins of what later came to be called "swing." Not all the music is that happy. We are taken to the depths of grief with Birkey's mournful muted horn in "And Can It Be." The album covers a range of emotions, but always with an underlying sense of loss.

If you want to hear the roots of jazz within a modern quintet context, this album will give you a very special, introspective perspective. And you'll rarely hear a trumpet player with such a deep self-expression as Nate Birkey.

Cristo Redentor; What a Friend We Have In Jesus; And Can It Be; His Eye Is On The Sparrow; If Thou But Suffer God To Guide Thee; O Sacred Head Now Wounded; Just A Closer Walk With Thee; Turn Your Eyes Upon Jesus The Deacon; Soon Ah Will Be Done.