By Ernest Barteldes
October 6, 2014
Sign in to view read count 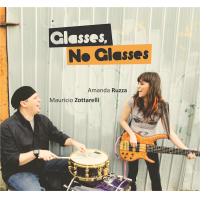 Those familiar with Amanda Ruzza's debut solo This Is What Happened (2012, Pimenta Music) will find no similarities between that project and this collaboration with fellow Brazilian drummer Mauricio Zottarelli. While that first disc went into more of a samba-jazz direction, this one could be classified as an electronic jazz album with funk-blues tendencies. Playing in a trio featuring Leo Genovese on a variety of keyboards and saxophones, the disc kicks off with "Soundcheck," a funk-inspired tune in which the keys play a plethora of sounds and even seem to fail (via a strange cracking sound) halfway through. That is followed by "Glasses," a tune that has almost a rock feel and whose groove allows Ruzza to experiment a lot with her bass line.

The most experimental track on the disc is "No Glasses," which has an eerie melody with layers of keys and then switches into a more traditional jazz groove with Genovese on sax , ending suddenly with some studio chatter in Spanish. "Classic Golden" is more melodic, shifting tempos between a Latin funk beat and a slower tempo that features an accomplished bass solo that wanders through the left and right channels (which is more noticeable with headphones). The album closes with the inventive "Everybody's Talking," a tune that begins with a reggae drumbeat and then evolves into a seemingly improvisational piece with a looping bass line that allows Genovese and Zottarelli to exercise their creativities.

Glasses, No Glasses is clearly not to be mistaken for a "Brazilian jazz" album—it is clearly an exercise in creativity that deserves close attention. It is definitely not easy to listen to at first, but after repeated hearings it can be highly enjoyable.