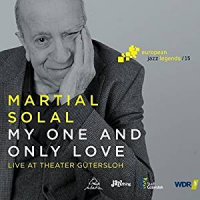 English poet Samuel Johnson famously and accurately remarked that "He that runs against Time has an antagonist not subject to casualties." With that statement, Johnson essentially cut to the ultimate truth behind man's battle with mortality, the powers of change, and the swift dominance of the aging process. But he didn't say it all. What he failed to address was the other side of the coin—those rare few that, while still on Earth, manage to flip Time from adversary to ally. Enter Martial Solal.

This nonagenarian French pianist has managed to absorb, distill and refract every style and sound he's encountered over his storied career. And what's all the more impressive is how he blends it all into a sui generis style that continually surprises. A small fraction of jazz musicians live and perform into their nineties; almost none of them, however, remain as relevant as this deft piano sage.

This program, captured in a German theater in late 2017, is a story of one man, one Steinway, and a bottomless well of wisdom and wit. Solal winds his way through a program that's both history and history-in-the-making, taking us from reconfigured Mozart to Broadway's beyond to Bebop nouveau. All the while he remains himself, toying with reharmonization, working magic with staccato and marcato machinations, slipping in sidebars and sly quotes, questioning with chromaticism, and charming the ears with some of the most wonderfully creative thoughts that could possibly be conjured from the bench.

Solal's music is anything but nostalgic, yet it never turns its back on any particular point in the past or present. In short, he works with all-seeing eyes and all-knowing hands. That's plainly obvious from the start here, a "Have You Met Miss Jones?" that's profoundly playful. From there he essays the great works of Ellington with complete success, turns "Sir Jack" (a.k.a. "Frère Jacques") into serious art with a somber yet sportive face, hits a variable stride with his own "Coming Yesterday," demonstrates mastery over mood and matter through expansive renderings of standards, and carries Mozart's "Marche Turque" from the madhouse to the meadows. When all is said and done, as if to remind us that any song can be approached from every angle, he brings us back to a wholly different "Sir Jack," where the weight is lifted but the whimsy remains.

An eight-minute interview with Solal closes the album, highlighting his sense of humor and clear-headed thinking. In this brief time, he addresses his earliest experiences with jazz, shrewdly dissects the closed-loop of jazz education, discusses piano quality, and holds the audience, sitting in witness, in the palm of his hand(s). Time may eventually overtake Martial Solal, but for now it remains his truest friend.

Have You Met Miss Jones?; Medley Duke Ellington: Caravan, Prelude To A Kiss, Sophisticated Lady, Satin Doll, Take The "A" Train; Sir Jack; Coming Yesterday; Köln Duet; My One And Only Love; Body And Soul; Night And Day; Marche Turque; All The Things You Are; Night In Tunisia; Tea For Two; Sir Jack; Interview.

Title: My One And Only Love: Live at Theater Gütersloh | Year Released: 2018 | Record Label: Intuition