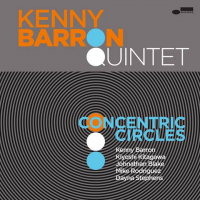 Hard to believe that, as Kenny Barron turns 75, Concentric Circles is his Blue Note debut, one that is as muscular, fleet, and entertaining as any debut by any man two-thirds his age.

Trust Barron's deeply-versed quintet to swing like a big band plus, and "DPW" leaps out at you with a jumping, bop personality, the flaring horns immediately announcing the dance floor open, and an Afro-Latin fused rhythmic dynamic that's impossible not to move to. Always a passionate player and a writer with a tight, expansive flair, Barron—like Duke or Mingus—is devoted to the expression of each player within the whole. The 11-song disc opens with four Barron compositions that span the full spectrum. The waltzing title track unfolds itself gracefully, with stalwart bassist Kiyoshi Kitagawa and drummer Jonathan Blake holding the center as Barron leads trumpeter Mike Rodriquez and saxophonist Danya Stephens into mercurial solos and delightful duet flights. Ditto "Blue Waters," the 6/8 lead track on Blue Note's, Jazz Now!, Apple Music, and Spotify's playlists.

The moody, bluesy "A Short Journey" captivates from the start, with Blake's delicate cymbal work and Barron's quiet, expectant runs setting the atmosphere for Stephens and Rodriquez equally triumphant, reflective solos. Ever entranced by the airiness of Brazilian music, the quintet's take on Caetsno Veloso's "Aquele frevo axe" serves to lighten the mood from the rumination of the previous track. That the next Barron original, the fleet-footed "Von Hangman" covers so much ground in under five minutes is yet another testament to Barron's compositional style. Stunningly, the quintet moves effortlessly from the dancing "Von Hangman" to the midnight-blue balladry of "In The Dark," certainly one of the leader's latter-day masterpieces. Lenny White's exuberant "L's Bop" gets a jovial, illuminating treatment, as does Barron's continuing testimony to one of his guideposts, Thelonious Monk, going solo and sumptuous on Monk's ever-brilliant "Reflections."

Oh, if only everyone would debut with this level of heart, artistry and sincerity. Imagine the music we would delight in.