Aubrey Johnson is a New York-based vocalist, composer, and educator who specializes in jazz, Brazilian, and creative contemporary music with and without words. She holds a Master of Music degree in jazz performance from the New England Conservatory and is set to release her debut album under saxophonist Greg Osby’s new record label Inner Circle Music within the next year. In 2011 she joined the voice department at the Berklee College of Music in Boston, becoming their youngest current voice teacher. In 2012, she joined the faculty of the New England Conservatory as the director of the school’s vocal jazz ensemble. In demand as both a side-person and a leader, Aubrey has performed and/or recorded with jazz greats Bobby McFerrin, Lyle Mays, Steve Rodby, Mark Walker, Paul McCandless, Fred Hersch, and Jimmy Cobb.

Born to a musical family in Green Bay, Wisconsin, Aubrey fell in love with music at a very young age and soon after began singing in church and taking classical piano lessons. In middle school, Aubrey began studying jazz piano and voice with Lawrence University professor, Christine Salerno. These lessons, and a newfound love for improvised music, led her to pursue a degree in Vocal Jazz Performance at Western Michigan University. Her studies with Salerno also piqued her initial interest in Brazilian music, a style that has become a major influence on her work.

Upon completion of her degree at Western Michigan, Aubrey yearned for further study and time to nurture her passion for improvisation and composition. At the suggestion of her teacher Fred Hersch, she relocated to Boston to pursue a Masters Degree in Jazz Performance at the New England Conservatory, on scholarship. Here she studied with some of the world’s top jazz performers and educators, including Danilo Perez, Jerry Bergonzi, Dominique Eade, Allan Chase, John Lockwood, George Garzone, Frank Carlberg, Jerry Leake, and Ken Schaphorst. At NEC, her penchant for singing without words soared, as she began performing her original compositions and those of her peers in this style. The concept of using the voice as an instrument has been something that has long intrigued Aubrey, who began doing so as a child, singing along with the classical piano music she studied.

While at NEC, Aubrey initiated the formation and was the assistant director of an official NEC ensemble: a 9-person vocal group directed by Dominique Eade. She was also the leader and soprano member of the Performance Outreach NEC Vocal Jazz Quartet (Tammy Scheffer, Tomas Cruz, and Charles Morgan), which performed regularly throughout the Boston area and held a week-long artist residency in Virginia Beach in 2009. In May of 2009, Aubrey graduated with honors, was awarded the “Gunther Schuller Medal” for “making an extraordinary contribution to the life of the school,” and won her third DownBeat Magazine Collegiate Student Music Award for outstanding performance in jazz voice.

Since graduation, Aubrey has performed (singing wordlessly and playing auxiliary keyboards) with Lyle Mays (keyboardist of the Pat Metheny Group), including shows at the 2009 Zeltsman Marimba Festival and the 2010 Gilmore Keyboard Festival, which also featured Steve Rodby (bass), Paul McCandless (woodwinds), and Mark Walker (drums). She recorded as part of a large vocal ensemble on Bobby McFerrin/Roger Treece’s Grammy-nominated 2010 EmArcy release “VOCAbuLaries.” She also founded, directed, arranged for, and sang in a vocal septet, “Prism,” which was active throughout 2009-2010, and was a member of the renowned Boston-based vocal group Syncopation (Christine Fawson, David Scott, and Lee Abe) from 2011-2012. Aubrey received an Honorable Mention award at the 2009 Voicingers International Vocal Jazz Competition in Zory, Poland and was a featured performer at the 2011 Jazz Education Network Conference, held in New Orleans, LA. During the spring semester of 2011 she began teaching at Berklee College of Music. At Berklee, she teaches private voices lessons and classes on improvisation, jazz styles, and rhythm section skills for vocalists. 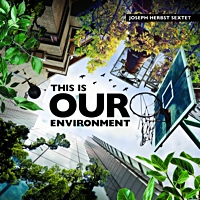 They Say There Are Beautiful Trees

From: This is Our Environment
By Aubrey Johnson

No More 'I Love You's

From: Atwood Suites
By Aubrey Johnson

All About Jazz musician pages are maintained by musicians, publicists and trusted members like you. Interested? Tell us why you would like to improve the Aubrey Johnson musician page.