Daniel Rosenthal: Music in the Room

By GLENN ASTARITA
December 10, 2017
Sign in to view read count 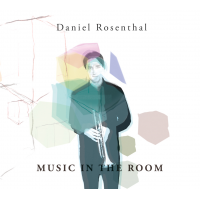 Trumpeter Daniel Rosenthal and his fellow hornists have all performed with the fabled, Either / Orchestra which to some extent has been an institution for many top-flight Boston area jazz musicians. Here, the leader and the dual sax attack of Charles Kohlhase and Rick Stone incorporate brash and fluid soloing into a program that contains a divergent track mix and covers a multitude of angles, cadences and improvisational applications.

Luther Gray has long been a drummer of choice for experimental jazz artists such as guitarist Joe Morris and others. On this outing, he provides a solid, polyrhythmic underpinning amid the bop-framed pieces, bluesy passages and free-form expositions via an effective rhythmic kinship with bassist Jef Charland.

The band whets your jazz appetite with a balanced modus operandi, encompassing hummable riffs, and complex melody lines, paired with airy and fierce improv exercises on the aptly titled "Improvisation I," and elsewhere. On "Easy Money" and "Hard Money," which are pieces the band performs as a mini-suite when performing live, they dish out punchy and popping unison lines along with flickering statements and fluent soloing spots. Thus, Rosenthal affords all players the time to stretch their wares, including Gray's intricately designed, power-packed solos that complement and accentuate the alternating flows: framed on bop, free bop and medium-tempo swing pulses.

An important aspect resides within the artists emotively enacted phrasings often rendered with climactic buildups and vibrant call / response episodes. And their upbeat take on Thelonious Monk's "Introspection," is augmented by the hornists' who explore and circle the perimeter of the main theme. The album closes with "St. George," that is fashioned on an engaging calypso groove and jovial primary theme, enamored by the soloists' creative improv and peppery choruses. Indeed, these invigorating works are enacted by like-minded musicians who demonstrate total control of their instruments, and benefitted by the passionate interplay they instill on a per-track basis.