Listening For The Secret: The Grateful Dead And The Politics Of Improvisation

BY IAN PATTERSON
December 10, 2017
Sign in to view read count 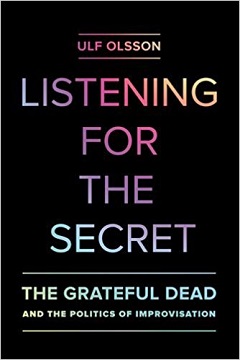 Listening For The Secret: The Grateful Dead And The Politics Of Improvisation
Ulf Olsson
184 Pages
ISBN: 978-0520286641
University of California Press
2017

The Grateful Dead, possibly the most heavily documented band ever, was under one form of microscope or another from its inception in Palo Alto, California in 1965. Music critics, academics, the FBI, all have attempted to understand the cultural phenomenon that was The Grateful Dead—and in doing so it seems, their respective conclusions, taken collectively, only thicken the plot still more.

Ulf Olsson's relatively slim but densely packed academic study—the first in a series from University of California Press inspired by The Grateful Dead—presents a complex but rounded picture of a band that was both deeply traditional yet genuinely avant-garde, fiercely independent yet—at least in its latter years—undeniably mainstream, apolitical yet politically challenging.

For Olsson, the essence of The Grateful Dead, its music, its successful business model and surrounding Deadhead culture, lay in improvisation. Political improvisation.

The Grateful Dead, of course, was never conventionally political. A benefit gig for The Black Panthers in the late 1960s and the dedication of a performance of "He's Gone" to the deceased Irish Republican Army hunger striker Bobby Sands in 1981 does not amount, over the course of thirty years, to a band much committed to political causes.

In fact, the apolitical stance of the band was probably a wise move to avoid manipulation by mainstream politics. Neither a 1990 invitation from Polish Solidarity leader Lech Walesa to play in Poland, nor another from the Vietnamese government in 1994 to perform in Vietnam, came to pass. "The Grateful Dead was about the freedom from authority..." states the author, ..."and the antiauthoritarian politics was rooted in an ongoing quest for musical freedom."

Improvisation, central to The Grateful Dead's live performances, had, Olsson posits, much wider implications in terms of the band's underlying ethos. Improvisation, he writes, lay at the core of the band's struggle for self-organization, for control over its affairs—musical and business—and material conditions. The Grateful Dead, Olsson states, generated self-organizational practises of political significance around itself, namely its fans, the Deadheads—many of whom were quite literally followers—and the community parking lot scene at its gigs.

In a sense, the author claims, the band generated "temporary and mobile forms of counter-conduct and resistance against mainstream culture and normativity..." Or in layperson's terms, which Olsson also occasionally peddles, the culture surrounding The Grateful Dead empowered its fans "to experiment with who they were."

Who The Grateful Dead was musically and how it operated, the book suggests, were also ongoing experiments and the author swivels his attention between analysis of the music and the social conditions in which it was performed. Musically, the band embraced both deep-rooted American musical traditions and avant-garde experimentation, which, Olsson posits, were both forms of response to the political and cultural dislocations of the 1960s.

If the band's country, folk and bluegrass leanings represented and appealed to a desire for traditional values in a time of great upheaval, then it's free-form, psychedelic jams seemed like a critical response to those conditions. The author's compelling analysis of a live performance from 1973 of "Dark Star" bleeding into Bonnie Dobson's post-apocalyptic folk song "Morning Dew" represents, he argues, "a political vision of the world as it is." Against the backdrop of Nixon, Watergate and the ongoing war in Indochina, Olsson claims: "The dark star here is America: imperialist, capitalist, violent, corrupt."

Olsson makes the case that where The Grateful Dead was especially avant-garde was in the way it handled its affairs. From sharing its music through the live taping sections at concerts to running a mail order ticketing service, and from flirtations with running its own record label to insisting on contracts with promotors that stipulated the band be permitted to perform for four or five hours, The Grateful Dead existed in a way that ran counter to established industry practises of the day.

For all the band's early counter-culture credentials—its involvement in the Acid Tests—and anti-authoritarian stance, The Grateful Dead worked with heavyweight promoters, were signed to a number of the industry's major record labels, sold tens of millions of albums and played increasingly larger venues as the years rolled by. Yet it achieved this success, this inexorable growth, largely on its own terms. By doing so, the author states, The Grateful Dead "sought to achieve what might seem impossible: creating and disseminating avant-garde art on a mass scale."

The most obvious political aspect of The Grateful Dead, Olsson writes in the chapter titled 'Wave That Flag,' was in its "elaborate and somewhat subversive use of American iconography in images and lyrics." The red, white and blue 'Stealie' —the skull and lightning bolt icon—is one example of what the author describes as "displacement or disorientation" of traditional American symbols.

This part of the book draws heavily on modern critical theories relating to the philosophy of art by philosophers and academics such as Theodore Adorno, Jacques Rancière, Kostas Vlassopoulos, Gilles Deluze, Gerald Raunig and Michel Foucault. It's undoubtedly intellectually challenging stuff, though arguably a little over-egged. In summation, however, the author supports the notion that The Grateful Dead were not anti-American but instead stood for experimentation with different ways of living in a country whose very complexity was mirrored to some degree in the band's music, its policy of self-organisation and in the alternative culture from which it emerged and helped generate.

This complexity, the ambiguity surrounding everything about The Grateful Dead is also reflected in the fact that definitive understanding of The Grateful Dead phenomenon remains, as Olsson's meticulously researched, painstakingly considered and often colourful study demonstrates, as teasingly elusive as political truth.