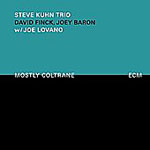 One of Coltrane's most elegant compositions, "Welcome" from Kulu Se Mama (Impulse!, 1965), opens the album, followed by an inspired version of "Song of Praise," setting a stately tone for the majority of the session. Kuhn also returns to the standard tunes he played with Coltrane—"Central Park West," "The Night Has a Thousand Eyes" and "I Want To Talk About You," highlighting the quartet's congenial rapport and effervescent lyricism.

Surveying the untapped potential of Coltrane's late period, the quartet covers a number of recently discovered tunes. "Configuration" and "Jimmy's Mode" made their premier on Stellar Regions (Impulse!, 1967), posthumously released in 1994, while "Living Space" was recorded in 1965—with the album of the same name unreleased until 1998. Although the majority of this date elicits a serene, ruminative view of Coltrane's legacy, there are moments of unfettered bliss that acknowledge the master's move towards abstraction. "Configuration" is the most visceral—a bristling excursion fraught with Baron's pneumatic salvos, the leader's quicksilver cadences and Lovano's intervallic torrents.

Interestingly, Kuhn shares none of the stylistic traits of Coltrane's primary pianists, sounding unlike Tyner or Alice Coltrane. Kuhn's feathery touch and delicate, dancing filigrees amplify the melodious lyricism at the core of Coltrane's most impassioned work with a harmonic density that maintains crystalline clarity, even in the most frenetic passages. Kuhn's original contributions, "With Gratitude" and "Trance"—introspective solo piano meditations that ebb with timeless beauty—reveal the master's influence without resorting to imitation.

A heartfelt, regal homage to one of the idiom's most celebrated artists, Mostly Coltrane is a superlative tribute album, breathing new life into acknowledged masterworks.