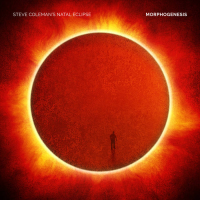 After his 2015 masterpiece, Synovial Joints, alto saxophonist/composer Steve Coleman left his listeners wondering how he could try to top that extraordinary project. With 21 musicians and an ambitious melding of classical and jazz instrumentation with intricate compositional decisions, Coleman used that record to reveal yet another dimension of his constantly-evolving musical concept—one that's been changing shape for over thirty years now. In some ways, Morphogenesis continues that project: although this is a smaller nine-piece ensemble, almost all of these musicians worked with Coleman on Synovial Joints, and there's a similar emphasis on the kind of instrumentation that opens up classically-influenced structural possibilities: most particularly, the presence of Kristin Lee on violin and Rane Moore on clarinet. Not only that, but with thematic inspiration from the world of boxing (as evidenced by song titles such as "Shoulder Roll," "Dancing and Jabbing," and "Inside Game"), Coleman continues to invoke metaphors linked to human physicality, just as he did with his anatomical references on the previous record.

But at the same time, it's also clear that this is a very different album. Most noticeably, there's almost no percussion on the record—something that will certainly surprise longtime Coleman fans, as there are few musicians who've done more over the years to highlight the work of truly first-rate drummers, a list that includes Marvin "Smitty" Smith, Jeff "Tain" Watts, Sean Rickman and Marcus Gilmore. The undeniable rhythmic power at the heart of Coleman's music has been channeled and enhanced in no small part due to the presence of drums in his music; yet here there's no "drummer" to speak of, and classical percussionist Neeraj Mehta is used very sparingly on only five of the nine tracks. While this still remains a rhythmically potent album—indeed, it's hard to imagine Coleman making any music lacking a fundamental rhythmic component—that element is now created mainly through the razor-sharp bass work of Greg Chudzik and the ensemble writing itself, which contains Coleman's trademark syncopated phrasing and myriad overlapping lines, which work to give the music its momentum and sense of forward thrust, even without the presence of a drum kit. The result is remarkably dense and sophisticated music, as one expects from Coleman, but it requires more of the listener to grapple with it. That toe-tapping accessibility that characterizes even the most esoteric of Coleman's earlier creations is less prominent here.

Even so, there's some remarkable music to be had on this record. But first, suspend expectations of easily-recognized themes: Coleman's approach instead involves the seemingly endless interweaving of phrases, sometimes played in unison and sometimes in counterpoint, using the entire palette of his ensemble. Don't count on a lot of extravagant soloing either, as Coleman is much more interested in drawing out the different textures and dynamic possibilities these instruments can create while in conversation with each other. It's the group dynamic as a whole that really takes center stage here, as each piece evolves through the mutual interactions of all the musicians. Take as an example the 14-minute centerpiece of the record, "Morphing," a hypnotic accrual of clipped phrases that gradually extend and alter their shape as they're played by various sub-groupings of the larger ensemble, eventually leading to ever-more-complex permutations and syncopated interjections as the piece builds to its thrilling culmination.

Other tracks worthy of note include "Pull Counter," where Coleman's alto hints at Charlie Parker's legacy through a bebop-flavored track that even adds an element of swing, thanks in part to Chudzik's walking bass line and pianist Matt Mitchell's Monk-like jabs; the soulful-sounding "Roll Under and Angles," where Jen Shyu's vocals and Jonathan Finlayson's trumpet tease out a lyrical dimension; and the last two pieces, the suitably-titled "Dancing and Jabbing" and "Horda," both of which offer the characteristic rhythmic suppleness of Coleman's classic work, wherein the music can captivate both the mind and the body in equal measure.

It may not quite reach the level of Coleman's finest music, and some listeners may have a hard time getting past the limited percussion—but any Coleman release is well worth careful attention and patient engagement, and this one's no exception.