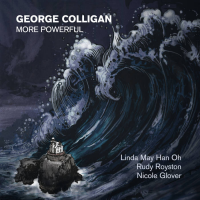 Pianist George Colligan's twenty eighth album as leader sees him joined by long-time colleague Rudy Royston on drums, bassist Linda May Han Oh and newcomer Nicole Glover, Colligan's former student at Portland, on reeds. Colligan has a long career in jazz and, in addition to teaching at Portland State University where he's the Jazz Area Coordinator, he has collaborated with the likes of Jack DeJohnette, Larry Grenadier, Don Byron and Cassandra Wilson.

This set of sprightly numbers all penned by Colligan, don't hold back at any time. The opener "Whiffle Ball," for example, is a hard bop tune which fairly explodes with energy. By contrast, "Waterfall Dreams" is a reflective modal piece dominated by Colligan's fluid piano work. If that were not enough, check out his lithe playing on the modestly titled "Effortless." Both these pieces are played in a trio context and offer a redolence of the spirit of Bill Evans.

The quartet is resumed on "Today, Again," Nicole Glover's tenor evincing a notably pure tone. Linda May Han Oh opens "More Powerful Than You Can Possibly Imagine" with low percussive pizzicato bass notes before the tune bursts into life. The ensuing maelstrom is powered by the dynamic drumming of Rudy Royston who has over the past twenty five years recorded with Bill Frisell and Dave Douglas and Ron Miles amongst many others.

Two more trio-only numbers ensure "Retrograde Pluto" and "Southwestern Silence" before the quartet plays the sultry and at times strident "Empty," the piano and tenor tracing an angular initial statement in unison. The finale number "The Nash" (named after the Phoenix jazz club) has Glover exuberantly soloing on soprano. Whilst many folks may not have heard of Colligan, who by the way also plays organ, drums and trumpet, they should take a listen to him, since the sheer vitality of his playing is truly remarkable, his tunes uniformly memorable and vibrant.