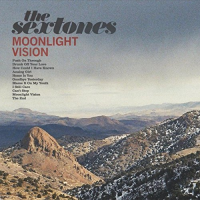 Led by songwriter, singer and guitarist Mark Sexton, The Sextones retreated to the relative isolation of Prairie Sun Studios in Sonoma (one of Tom Waits' favorite recording locations) to lay down their full-length debut. "One of the intentions of Moonlight Vision's production was to have a sonically classic sounding album—sounds that are reminiscent of music we grew up listening to, but with a modern character," Sexton notes. "I think we achieved that."

Moonlight Vision captures the band's no-nonsense neo-soul sound in no-frills production, and overspills with the sound and feel of classic Motown, Stax, Hi and other legendary soul labels. (Its packaging lists the songs on "Side 1"and "Side 2," as if it was an old-school vinyl recording, too.) For example, I'd love to hear Al Green's wispy falsetto dance through "I Still Care," which sounds like Marvin Gaye and Maxwell swapping vocals along with several bottles of wine, and "How Could I Have Known."

Sexton floats up into his own falsetto in "Drunk Off Your Love," which spreads blue-eyed soul like thick and sticky Hall & Oates jam. The opening "Push On Through" does precisely that with a torrential flow of soul and R&B and rock straight from the band's collective heart, very much like a Stax Records shout by Sam and Dave except with only one singer (who also shreds some mean guitar rock in his bridge solo).

Punched up with horns in airtight arrangements, "Goodbye Yesterday" and "Blame It On My Youth," a hymn to the virtues of being young enough to get away with trouble, sound like Steely Dan working out a couple of R&B warhorses but without the bitter taste of Donald Fagen's cynicism.

Most of all, Moonlight Vision catches the sound of a young band still in search of itself but looking in some mighty promising directions. "Love, resentment, growing up, fear, stubborn defiance, and dissatisfaction with current times are reoccurring themes for Moonlight Vision," Sexton muses. Such themes won't be going away any time soon, and should give The Sextones plenty of material for wherever their follow-up may take them.

Push On Through; Drunk Off Your Love; How Could I Have Known; Analog Girl; Home Is You; Goodbye Yesterday; Blame It On My Youth; I Still Care; Can't Stop; Moonlight Vision; The End.