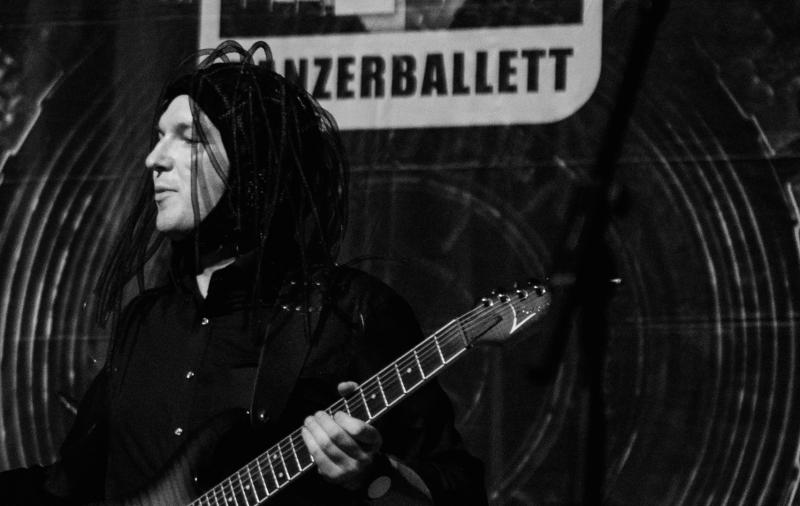 BY PHILLIP WOOLEVER
August 27, 2017
Sign in to view read count
The German group Panzerballett may have a metal edge on much of their music, but there's no mistaking that by any rational judgment this is also a definitive jazz band. Fans can always count on unpredictably adventuresome twists to the standard form on classics like "Birdland" or "Take Five" amidst inspired originals.

Bandleader Zehrfeld is definitely a well-versed figurehead in providing insight to Panzerballett dynamics.

All About Jazz: How do you describe the thought process of writing new songs that seem to mix metal and jazz, and adapting other songs like "Giant Steps"?

Jan Zehrfeld: Everything usually starts with a rhythmical idea transferred to a bass or guitar riff, which is always the backbone of a tune. The second step is adding drums around that. During this process often the original riff is modified since the adding of drums makes it sound differently. The same applies to the adding of melodic and harmonic ideas. All new and existing parts influence each other. It's a huge trial and error process. Actual creating is probably about fifteen percent, the other eighty five percent is adapting all parts to each other until they blend in a musical way to me. My main tool for that is the computer, which can instantly play my most complex ideas.

This ratio I mentioned probably explains why I only see a slight difference between composing an original and re-imagining an existing tune. The fifteen percent of creating is just replaced by more adapting of the original.

Most parts of the tunes are written out, but around a third is open for improvisation just like in the jazz-fusion tradition. The improvisational parts mostly have a harmonic and rhythmic structure referring to the composed ones. Many people call the non-originals "cover songs" but the Panzerballett treatment is quite a different form of covering. Imagine the songs were made of flesh and blood. It would be like the difference between surgery and make-up artistry.

AAJ: Can you elaborate on that process?

JZ: Some songs are created within a couple of days, others take me months of collecting different separate ideas that I try to connect to each other at some point. Some fit well together, and some don't. Some cool ideas have been waiting for years in my basement to be embedded into a tune.

AAJ: Audiences and critics have remarked on how powerful the band sounds. What is Panzerballet's greatest strength?

JZ: The ability to play exactly enough to make extremely complex rhythms actually sound plausible. We can play at both jazz and metal venues and impress the accordant audience, thus getting people of wide-ranging age differences together that don't usually meet at concerts or follow the same style of music.

AAJ: Your collaboration with Indian percussionist Trilok Gurtu was quite unique. How did that session come about?

JZ: Our drummer Sebastian brought up the idea of asking Trilok for a guest appearance after they played together with Martin Grubinger and the NDR Big Band. It took me several attempts to convince him, but eventually Trilok agreed and came to Munich for one day, recording his parts in the studio. He had checked out some tabla and vocal parts for the intro of the song "Shunyai" but also did improvisation, which was awesome, refreshing and not to mention, a big honor. He turned out to be specific and determined, yet a very nice and easy-going guy.

AAJ: What are your influences ?

JZ: When Panzerballett was formed there were main influences like Allan Holdsworth, Meshuggah, Virgil Donati, Tribal Tech or the Brecker Brothers. Ever since then, the biggest influence for each album has been the previous one, through the self-imposed obligation to improve, evolve and not to repeat oneself.

AAJ: Your take on Henry Mancini's "Pink Panther Theme" always gets a very positive reaction from concert crowds. You unveiled a new version on the last album, any particular reason for the changes?

JZ: There are two main reasons why we re-arranged an older arrangement from 2005 of the same song. First of all, it has been our most popular track and we wanted to make it fresh. Secondly, over the years the song went through several changes we wanted to keep. This is a good example for straightening out rhythms by merging four bars of sixteenths into one quarter bar. The key signature was adapted to the lowest string of an eight-string guitar as opposed to the earlier six-string version.

AAJ: A press release for the last album noted the amount of time and tempo changes was "consciously reduced." What led the band to that decision?

JZ: It was made for several reasons. The most banal one: it makes it easier in rehearsals, since we like to practice with a metronome. Without time and tempo changes in a song, it does not require a programmed click. A steady click improves the collective timing and reduces rhythmic insecurities. The grade of wackiness is not lowered when working with polyrhythms. Also, it gives the younger audience a chance to do "normal" head banging. Yes, we do want commercial success.

AAJ: What's next on the agenda?

JZ: We recorded a Christmas album to be released in November. This will be our sixth release, entitled "X-mas Death Jazz," and it will be followed by a German tour in December.