BY CHRIS KOMPANEK
December 10, 2009
Sign in to view read count 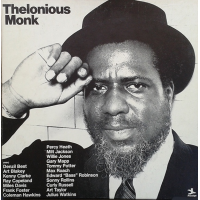 The remastered Monk is actually two mini-sets melded into one with the first quintet consisting of the underrated trumpeter Ray Copeland, tenor saxophonist Frank Foster and bassist Curly Russell, with the legendary Art Blakey holding it all together on drums. These first four tracks (including a beautiful rendition of the Jerome Kern classic "Smoke Gets in Your Eyes") are upbeat and decidedly lighter in tone. This half ends with a masterfully syncopated solo by Blakey on the jaunty "Hackensack," named after the New Jersey town where the set was recorded in 1954.

The last three tracks were recorded a year before in New York with tenor saxophonist Sonny Rollins, bassist Percy Heath, French horn player Julius Watkins and drummer Willie Jones. A dramatic shift from the first set, the tone is dark, moody and methodically paced. Rollins' effortless riffs complement Monk's catchy avant-garde melodies and creative harmonization. It's interesting to compare two back-to-back takes of "Think of One." The subtle differences reveal themselves upon repeat listens. The second take has a tighter intro based heavily on the song's chord progression with a piano flourish punctuating the end phrase. In general, notes are chosen with more care, though the solos on the first version take more risks. This dichotomy sums up the two sides of Monk's playing.

The first set shows a penchant for melody while the second captures an innovator mixing up the status quo in search of a new and exciting sound. Both are important to understanding his rare talent.

On The Bean; Recollections; Flyin' Hawk; Drifting On A Reed; Sweet And Lovely; Little Rootie Tootie; Bye-Ya; Monk's Dream; Trinkle Trinkle; These Foolish Things; Bemsha Swing; Reflections; Let's Call This; Think Of One; Friday The 13th; We See; Smoke Gets In Your Eyes; Locomotive; Hackensack; Work; Nutty; Just A Gigolo; Blue Monk; I Want To Be Happy; The Way You Look Tonight; More Than You Know; Bemsha Swing.