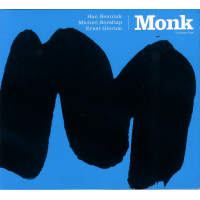 Pity the straight man that has to play alongside the comedic drummer Han Bennink. In his 50+ years of music making, no gesture, tap, thump, or strike has gone unnoticed. And while he has covered the music of Thelonious Monk before, never has Monk, as interpreted by Bennink, sounded better.

On paper this recording, a piano trio, figures for a standard trip around Monk's planet. Funny how this music was considered odd or strange, back in the day. The twelve tracks heard are all familiar fare to the fan—that is, of course, until Bennink gets involved.

Dutch pianist Michiel Borstlap is a chameleon of a player, equally comfortable in rock, jazz, fusion, or classical music. The third member of the trio is bassist Ernst Glerum, a veteran of the infamous ICP Orchestra and a regular player in all matters of the New Dutch Swing.

There is no doubt who is directing things here. Playing from a single snare drum, Bennink talks Monk's language. For his part, Borstlap eschews the straight Monk imitation. That, of course, could be disastrous. He prefers a slightly more modern approach, updating Monk's stride for thicker chords and a pinch of sentimentality rarely heard in Monk's playing.

But what can you do when Bennink is playing all over his single snare drum, shuffling notes, and changing the time at will? Unlike fellow Dutch pianist Misha Mengelberg, Borstlap chooses not to go toe-to-toe with Bennink. On "Evidence," he dances around the drummer, sticking to a two-handed bluesy swing that Herbie Hancock might have summoned. He rounds the edges that Bennink folds sharply, providing a gentle swing to Bennink's hijinks.

Alongside Alexander von Schlippenbach's Monk's Casino (Intakt, 2005), this is certainly one of the finest Monk tributes to come along in recent years.