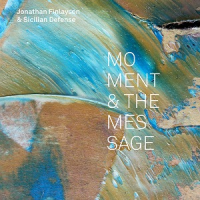 For those who've been watching the rise of trumpeter Jonathan Finlayson in recent years, his long awaited debut, Moment & The Message, not only displays his insightful playing and individualism but also some imposing composing skills. A prodigy who impressed pioneer saxophonist Steve Coleman when he performed in high school, Finlayson later moved to New York, attended The New School for Jazz and Contemporary Music and has thrived for ten years as a vital member of Coleman's iconic Five Elements collective.

Together, they form a potent but pliable unit that can handle their leader's swirl of arduous grooves, modernist swing, and European and Latin flavors. Another factor is the way Finlayson expounds on his learning from Coleman's progressive concepts such as the conceptualism in "Circus" which incorporates a jagged groove cadence reminiscent of saxophonist Henry Threadgill's works before morphing into an elegant surrealist theme.

Though the music is thought-provoking it's also filled with a strong sense of melodicism found in Okazaki's stunning work in "Tensegrity" or the copacetic vibe of "Carthage" where Finlayson lays down an elaborate yet poised solo while the band works through detailed accompaniments. Other insights include intricate instrumental conversations in "Ruy Lopez," appropriately named after the classic opening moves of a chess game; or the almost thirteen minute "Fives and Pennies" built around an increasing metronomic pattern. While Finlayson's playing is cognizant of the great players that have paved the way, it's refreshing that he's seeking his own path and not trying to mimic them.