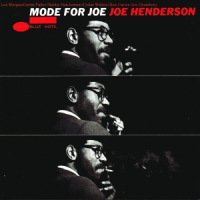 Recorded and released in 1966, Mode for Joe was Joe Henderson's last session as a leader for Blue Note Records until 1985's State of the Tenor.

True to form for the period, the recording features a cast of legendary players in peak form. In this case Henderson shares front line duties with a fiery Lee Morgan on trumpet and a young Bobby Hutcherson on vibes. Curtis Fuller's trombone adds low-end heft to the melodic statements.

Forget that cup of coffee in the morning, just throw on "A Shade of Jade" and crank it up; the track is power and swing— brilliance with the kind of authority that flames out the loudspeakers of the unwary. It puts the "hard" into "hard bop." No one is holding back here, playing full tilt with the utmost confidence and verve. It's also solidly structured, with ensemble playing carrying as much weight as the solo statements. The arrangements are tight and slightly, though not jarringly, discordant.

Of course, solo statements are important and this record has plenty. "Caribbean Fire Dance" captures Henderson and Morgan at their most creatively aggressive. Henderson, who by now had found his own truly personal sound outside the influence of John Coltrane, who was so pervasive in the 1960s, manages the trick of maneuvering in and out of the harmonic structure of his own tune in practically alternating measures. But he keeps it all in context, and when he's gone way out on the limb he reels himself back in with a simple bebop line before moving on. It's the kind of playing that requires real mastery of the music's history and styles. Morgan's solo is white-hot brilliant with his signature brilliant brass tone, and Fuller and Hutcherson follow in line. It helps that the tune has a solid thundering jungle beat to hold everyone together.

The record closes out with Morgan's "Free Wheelin,'" perhaps the most tightly structured melody on the record. They slow it down a little with this one, and Henderson's solo statement is maybe a little more constrained, but Morgan is having none of it: He announces his turn at the mic with a startlingly loud blast and he keeps the volume up even as he measures his pace. Morgan's sound is as clear and immediate as Louis Armstrong, a direct connection to his own exuberance.

Mode For Joe has been reissued by Music Matters on 45RPM vinyl records. They've painstakingly re-mastered the session from the original master tapes, making sure to keep a purely analog signal chain. The results speak for themselves; tremendous dynamics and extraordinary detail allow everything to come through loud and clear.

Musically, Mode for Joe is as solid a record as is likely to be found, and the first-rate reissue package really does it justice. There's a lot going on here and the exceptional sound quality just makes it easier to appreciate. Add to that a fine, heavyweight gate-fold cover and extra session photos and this is a truly compelling package.