By Dan McClenaghan
September 29, 2013
Sign in to view read count 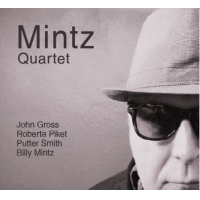 The jazz world is packed with dynamic drummers, and players who raise the job of timekeeping—and beyond—to a fine art. And then there are the supreme poets of the drum kit: The late Paul Motian, with his gentle orchestra of textures, colors, and diaphanous accents; Jack DeJohnette, with his bustling undercurrents and rock steady grooves; and, perhaps lesser known, but no less noteworthy, is Billy Mintz, with his melodious, metallic, shuffle-and-bump rhythmic dance.

Mintz—who has recorded with The Lee Konitz Nonet, Eddie Daniels, and pianist Hal Galper—offered up an overlooked masterpiece in 2004 with Beautiful You (Origin Records), a duet recording with saxophonist John Gross. For the marvelous Mintz Quartet, the drum master is joined again by Gross with his open, often hollow-but-robust-sounding tenor sax, along with pianist Roberta Piket, and bassist Putter Smith.

The set is organized int two distinct halves, like a record album. Tunes one through six (call it "Side One) feature five of the six tunes found on the Beautiful You outing, opening with a brief visit to that release's title tune, with Piket's gorgeous and lush pianism on full display.

Mintz must have a thing about beauty. "Beautiful You," "Beautiful," and "Ugly Beautiful" are three of his song titles here. The first two of these live up to their names while the third might have more accurately been called "Powerful Beautiful." The set's longest piece at nearly thirteen minutes finds Piket pounding out McCoy Tyner-like chords, with Gross blowing anguished utterances and Mintz laying down sheets of agitated percussion.

"Cannonball," the tune that opens "Side Two," features a surprisingly soulful Piket on organ. She is a versatile keyboardist who can approach the piano from inside or out, with lush romanticism ("Beautiful") or percussive muscularity ("Ugly Beautiful"), or out- there edginess ("Shmear.") But with "Cannonball," she and the band enjoy a ride down the Detroit groove. On "Relent," Putter Smith's bass drives the music forward, ten miles over the speed limit, with Piket on organ again, while Gross tightens up his sound in front of the relentless Mintz.

The set closes with "Retribution" and "After Retribution," ten minutes of dark, foreboding atmospherics to wrap up one the year's outstanding, modern-leaning recordings.