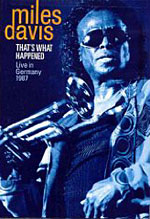 That's What Happened: Live in Germany 1987

The idea that Miles Davis "lost his chops" sometime after the '70s has been stated many times. This DVD offers proof that they simply evolved along with the changing musical landscape in order to be (as Miles says in a bonus interview) "up to date." In fact, this performance, captured in Munich circa 1987, shows him in excellent technical form. Davis—often hunched over with the trumpet pointed between his knees—wanders freely around the stage. After taking one look at the flamboyantly dressed Davis, with his bright-red bomber jacket, futuristic sunglasses and curly, flowing mane, you'll know you haven't purchased Kind of Blue: The DVD.

He makes his band work at an especially furious tempo on the opening selection: a medley of "One Phone Call," "Street Scenes" and "That's What Happened." The group also performs interpretations of two '80s pop hits: Michael Jackson's "Human Nature" and Cyndi Lauper's "Time After Time." Scoff if you will; many people do when they see Davis' name next to these titles, but the performances themselves are soulful and inspired. Davis receives solid support from Kenny Garrett on saxophone and flute, Adam Holzman and Bobby Irving on keyboards, Darryl Jones and Joseph "Foley" McCreary on electric bass and Ricky Wellman on drums with percussionist Mino Cinelu.

Just as compelling as the concert is the aforementioned, somewhat-bizarre bonus interview; an open-shirted Davis—again sporting the "space-shades"—goes tete-a-tete with a soft-spoken German journalist. Topics of discussion include Davis' art (he doodles on a notepad throughout the interview), his lucrative European tour and his affection for music videos by Prince. Davis fans will no doubt enjoy this release, a time capsule illustrating where he was musically just a few years before his death. Although naysayers flummoxed by the icon's physical appearance might disagree, every note unmistakably sounds like it could have only come from one man: Miles Davis.