By Troy Collins
September 12, 2009
Sign in to view read count 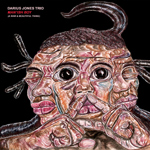 For his first record, Jones recruited drummer Bob Moses and multi-instrumentalist Cooper-Moore—two of his mentors—to be his rhythm section. Holding his own in the presence of such legendary heavyweights, Jones is also heard playing with Lane and Nazary on "Chaych," a live bonus cut appended to the end of the album.

Despite being their first recorded encounter, Cooper-Moore and Moses make a sterling pair. Moses approaches his kit with a ritualistic sensibility, rarely establishing strict tempos or meters as much as implying them. Providing supple fluidity and undulating percussive undercurrents, Moses' dynamic interpolations provide Cooper-Moore and Jones with an expansive, elastic canvas.

An expressive instrumentalist, Jones pours his heart and soul into his keening solos, plying sweet and sour cadences that veer from the coruscating melt-down of the noir-inflected "Cry Out" to the romantic glissandos of "Forgive Me." On the former, Jones haunts Cooper-Moore's menacing left hand ostinatos and Moses' rollicking shuffle rhythms with his wide vibrato, goading them into a caterwauling climax of ecstatic proportions. His abstract variations on the alto and diddly-bo duet "We Are Unicorns" drift into hypnotic introspection, while his variable tone and vocalized phrasing provides dynamic contrast to Cooper-Moore's beatific piano filigrees on the tender "Meekness," invoking Ellington's "Come Sunday" in passing.

The album offers a range of emotions and moods with a fairly limited palette. The rambunctious abstract funk of "Chasing The Ghost" features earthy harmony between Jones' acerbic alto and the rubbery twang of Cooper-Moore's diddley-bo. The duo feature "Big Train Rollin'" showcases the leader's ability to weave melodious fragments from multiphonics and alternate fingerings while navigating Moses' skittering percussive ruminations. And finally, the collectively composed "Salty" highlights the trio's congenial interplay on a spiky freeform excursion.