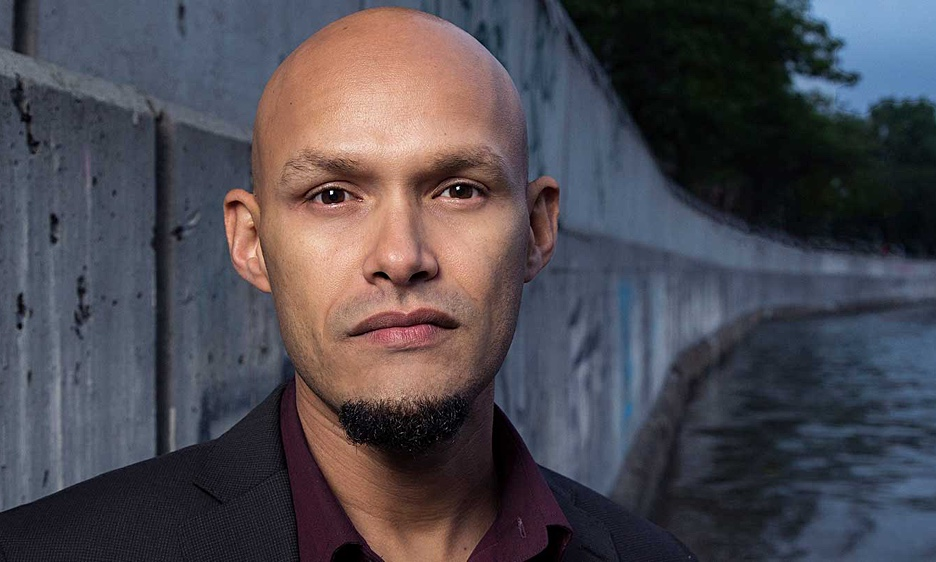 With its fabulous acoustics and visual projection capabilities, the SF Jazz Center is the ideal venue for Miguel Zenon's performances of his recent Golden City Suite project. Zenon conducted interviews in several of San Francisco's ethnic communities—Chinese, Japanese, Mexican, African American, and others in preparation for composing this work. A panoramic projection display on the walls provided visual context for each community associated with its segment of the music.

Zenon is a slender, wiry man with a clean-shaven head. It is no surprise that he won a MacArthur Genius award for his work as an alto saxophonist, composer, and bandleader—he carries the bearing of genius. He has the spark and rhythmic herky-jerky movement of an electrified wire, invoking his whole body in the quietly commanding presence of his playing.

He has assembled an intrepid collection of musicians, each of whom easily warrants a descriptive paragraph. The horn section consisted of Zenon and three trombones. Trombonist Diego Urcola deftly doubled on blazing upper-register trumpet, and Jacob Garchik smartly doubled on Euphonium; Alan Ferber's excellent musicianship stuck solely to his trombone. The rhythm section was also outstanding, featuring the estimable Matt Brewer on bass, the singular Matt Mitchell playing hauntingly on piano, Miles Okazaki weaving delicate spacious lines on guitar, the venerable Dan Weiss on traps, and the young fiery phenom Daniel Diaz on congas, timbales, and frame drums. Diaz was featured in an electrifying frame drum solo that lasted five minutes without a dull moment. His creativity, clarity, and crispness of attack were formidable.

In essence, the Suite was a symphonic work—tightly written and expertly arranged—where each ethnic community was afforded a movement, replete with its appropriate transcribed sub-sections and moods—pain, anger, exclusion, erasure disenfranchisement, and splendor.

The set began in darkness, with Zenon walking onto the stage while playing. After a bit, the other musicians entered the dark before joining his musical promptings. There were so many different modes and moods that the work sounded the way abstract art looks while at the same time being all too real and utterly hypnotic—simultaneously swinging and gripping.

After the set, the group left the stage in reverse order from which they entered. Fittingly, not a word was spoken all evening—what could verbally be added to the fulsomeness already present? It was a spell-binding, jaw-dropping experience—church indeed.

The Golden City Suite bears little resemblance to his previous work and represents a vibrant new direction for Zenon and his cohorts.