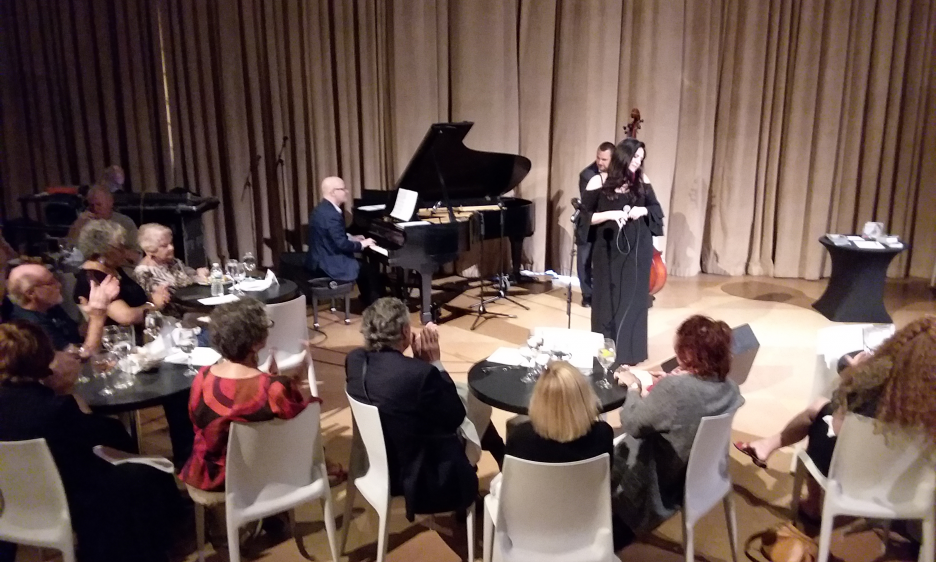 I've always appreciated Michelle Lordi's singing through her fine recordings, but I'd never heard her in person, so I seized this opportunity to hop over to the Philadelphia Museum of Art to catch her show, especially because her trio included two of the finest musicians on the scene today: Jim Ridl on piano and Matthew Parrish on bass. Ridl and Parrish have worked together often; Parrish is bassist on one of Lordi's CDs; I believe this is the first time Ridl has worked with Lordi, and he added a rich contemporary flair to a set of standards from the swing era, which largely have been Lordi's métier.

Lordi's approach to the standards is artistic and measured. She has a soprano voice that has a vintage wine quality that is perfect for jazz. She sings the songs as composed, with nothing superfluous. She captures the emotional meaning of the words by subtle nuances of voice and inflection. She began by rendering "I Didn't Know What Time It Was" and "My Ideal" in a way that brought out what we covet in the Great American Songbook: a wistfulness and simplicity of reflections about love. "You're My Thrill," a Billie Holiday staple, takes more force of the blues, which came out in Lordi's sustained notes, which was fortified by a virtuosic solo by Ridl with even a touch of Charles Mingus to be heard in some pianistically difficult sharply syncopated tone clusters.

"Skylark" is so overdone that it sometimes sounds like a five finger exercise. Lordi gave it a fresh perspective by taking it at an even more "lento" laid back tempo than usual, giving her the opportunity to contemplate every phrase. In her hands, the tempo turned out to be just right, because the tune itself descends gradually, as a skylark might in the solitude of the evening. Lordi makes us realize that this Hoagy Carmichael chestnut is a vocal masterpiece rivaling those to be found in classical song cycles.

As if to punctuate the set, "My Shining Hour," a favorite of both June Christie and Chris Connor, was taken at a swinging clip, with a solo intro by Parrish that made one wish he were given more opportunity to show his wares. Parrish, perhaps correctly, saw his role as an accompanist, while Ridl had no problem adding his distinct idiom to the mix.

Following a rather bland interpretation of a rather bland tune, "Lover Man," real magic happened. Lordi sang a country tune called "When the Stars are Blue," by Ryan Adams, an apparent musical descendant of Don McLean. It so happens that Ridl regularly incorporates and composes country music in his repertoire. He brought this inherently beautiful song to a magnificent conclusion with a sermon-like chorus to die for. The set concluded with Frank Loesser's "I've Never Been in Love Before," in a bit more cheery version than Chet Baker's vocalization of innocent love on the verge of collapse.

Friday Nights is a long time ongoing event of the Museum held in the central foyer, a huge resonant space with steps rising above the performance area that serve as a kind of grandstand. Guests are encouraged to visit the museum exhibitions and then settle into some good music and, if they wish, food and drink. It's a wonderful atmosphere for relaxing, socializing, and experiencing the connection between the visual arts and music. The only problem is that folks are so relaxed that they engage in lively conversation during the performances! This is a problem in many jazz venues to begin with. Fortunately, I had a seat at a table right in front of Lordi, so I could hear quite well. If you go to one of these events to hear the music in its full glory, I recommend that you reserve a table.

Set List: I Didn't Know What Time It Was; My Ideal; You're My Thrill; Skylark; My Shining Hour; Lover Man; When the Stars are Blue; I've Never Been in Love Before.