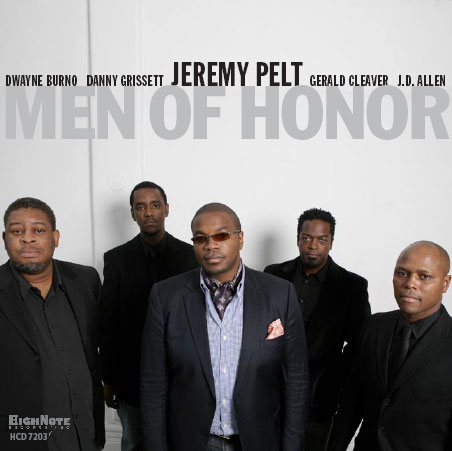 The title of firebrand trumpeter Jeremy Pelt's Men of Honor refers to the members of his quintet who, like their leader here, are among the foremost 30-something neo-bop players in jazz today. The album is a follow-up to Pelt's acclaimed November (MAXJAZZ, 2008), which marked this all-acoustic quintet's debut, and came on the heels of a couple of releases that explored a sort of early-1970s electric Miles Davis vibe.

Heralded for years as one of the "rising stars" in jazz, Pelt has earned accolades for his staggering virtuosity, which has elicited comparisons to trumpet icons like Clifford Brown, Lee Morgan and Freddie Hubbard, as well as for his studious, cerebral approach to the music. While he's clearly the man in charge here, Men of Honor is very much a band-focused release, with all five members of the group contributing compositions (Pelt penned four of the tunes) and all five voices heard distinctively and insistently throughout.

Pelt's group is that rarest of all things in jazz, a working band, and the familiarity and instant communication that come from extensive time spent playing together is evident. JD Allen is a perfect frontline partner for Pelt, his rich tenor sax sound offering a mellow counterpoint to the trumpeter's crisp, vivid tone. And the rhythm section of pianist Danny Grissett, bassist Dwayne Burno and powerhouse drummer Gerald Cleaver is as dynamic as any working in jazz at the moment.

Among the standout tracks are Burno's strutting opener, "Backroad," Pelt's energetic ode to his new son, "Milo Hayward," and Grissett's romantic closer, "Without You." Most of the tunes here fall nominally under the rubric of post-bop, but some, like Pelt's "Danny Mack," edge further outside, with Grissett pounding out dissonant chords while Pelt and Allen solo furiously.

At 33, Pelt is just starting to come into his own. Men of Honor is his most mature, satisfying release to date and a great way to start 2010 in jazz.

Backroad; Milo Hayward; Brooklyn Bound; Danny Mack; From a Life of the Same Name; Illusion; Us/Them; Without You.