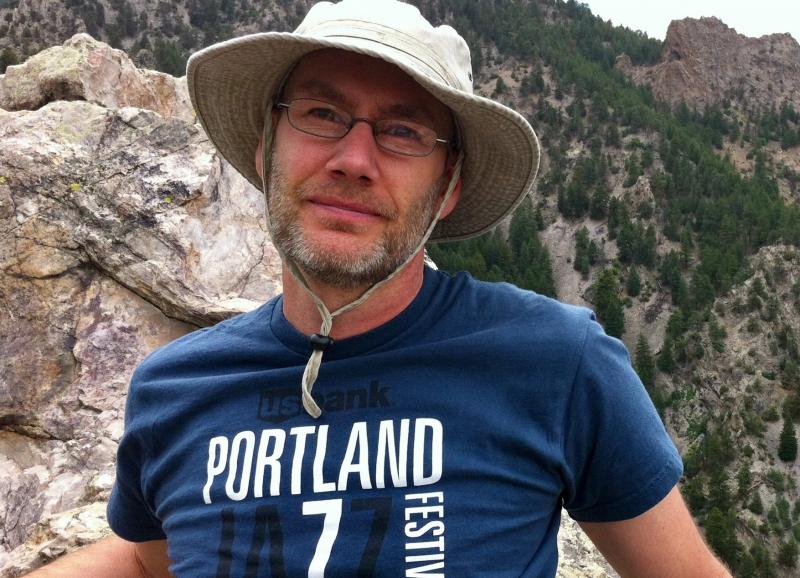 By TESSA SOUTER AND ANDREA WOLPER
May 1, 2017
Sign in to view read count

I am happy to travel wherever the music is being played. When I lived in Knoxville I remember going back-to-back to Atlanta to see Chick Corea's Origin band [and] Chicago to see Keith Jarrett's Standards Trio and The Brad Mehldau Trio. These days I'll go up to Seattle to see a show that is not coming the 175 miles south to Portland.

Our youngest Super Fan to date, and our first from the west coast, James Busby was weaned on the popular music of the '70s and '80s. His first jazz concert—Donald Brown at a local club in Knoxville, Tennesse for a $3 cover—was life-changing. He may not have discovered jazz until he was in college, but ever since then he's been in deep enough to go the extra mile—even when the extra mile means driving from Knoxville to Atlanta, or flying from Portland to Chicago. And as serious as he is about the music he loves, he's got a wry understanding of the jazz world we know you'll recognize and appreciate.

Tell us a little about yourself.
I'm originally from Massachusetts, grew up in southern New Hampshire, attended college in Tennessee, and have lived in Portland, OR for the last 12 years. I also did a four-year hitch in the Coast Guard in there somewhere. I'm a hotel concierge, and also work part time at the county library. In my spare time, I do a lot of volunteer work for PDX Jazz in Portland, which has given me the opportunity to meet and hear several musicians. My interests lie in all things music, watching too much sports (a habit since an early age), hiking, reading, and observing the workings of the world.

What's your earliest memory of music?
There were a few records around the house that I remember: the Saturday Night Fever soundtrack and the Hair cast album, and also a Donna Summer cassette, but they didn't mean much to me. The radio was playing in the background, but I really didn't notice it.

In the summer of 1978 my family moved to a new town and I acquired a new set of friends. I collected baseball cards, and one of my friends told me his brother wanted to trade cards with me. I was 7. I walked up the street with my shoebox full of cards and up to the brother's bedroom. He had covers of Rolling Stone and Sports Illustrated all over his walls. He put on a record and the sound—it was so loud and like nothing I had ever heard before. It took over my whole being and I was totally mesmerized. He said, "Do you like it?" and I mumbled something like, "Yeah, it's cool!" He said, "It's a new band called Van Halen. It's called 'Eruption.'" That was the time I found out music was more than background music.

How old were you when you got your first recording, and what was it?
The first cassette tape I remember owning was Face Dances by The Who. I loved "You Better You Bet." Still do. I think I got it for Christmas in 1981, when I was 10. But I also had a cassette of Zenyatta Mondata by The Police, which I may I have gotten the year before.

Was there one album or experience that was your doorway to jazz?
I attended The University of Tennessee in the 90's and spent a lot of time with an artist, Cynthia Markert. She was, and still is, the biggest jazz fan I have met. She played me so many albums during so many late nights. She said to me there are three pianists you need to listen to: Keith Jarrett, Marc Copland, and Steve Kuhn. I listened to all three and loved Marc and Steve, with whom I have been fortunate enough to forge friendships. I've been very fortunate that some of my favorite musicians have turned out to be great people as well.

I also took a history of jazz course my last semester, which exposed me to the whole genre. I was lucky enough to have a great instructor (also a great drummer) in Keith Brown.

What was the first jazz concert you ever attended?
One of the requirements of the jazz class was to attend a performance. The great pianist Donald Brown was also on faculty, and he played at the local club, Lucille's, three nights a week. The cover charge was $3. That was the first time I saw a jazz musician—and from three feet away. It was astounding because there was actual non-verbal communication between musicians, which I had not experienced at the hockey rink shows (outside of the Grateful Dead, of course). That, in turn, added a spontaneity to the show. When I had previously seen bands, they worked off a set list with zero improvisation.

How long have you been going out to hear live music?
Thirty-four years. First show I saw was Asia at The Cumberland County Civic Center in 1983. Carl Palmer playing drums is still a highlight.

How often do you go out to hear live music?
For the most part, I'll only make an effort to go see jazz; I would say I go four to five times a month. I don't have a desire to see much rock anymore because I find myself standing in a undesirable venue, at an undesirable time, drinking a beer at an undesirable price, listening to a band playing their album. Most times I ask myself why aren't I at home listening to the album without all these undesirable factors? That said, I plan vacations around going to see my favorite jazz musicians.

What's the farthest you've traveled to catch a performance?
A couple of years ago my wife and I flew from Portland to Chicago to see Steve Kuhn play at The Green Mill with Billy Drummond and a local bassist. It was a mess to get there in that an air traffic controller tried to kill himself in Illinois, and our plane was diverted to Minneapolis. We arrived in Chicago eight hours late with no sleep, took a nap at the hotel, and headed to the gig. It was a great show, and Steve was overwhelmed that we made the effort. And we got to meet Billy Drummond, who is still a friend today.

ADVERTISEMENT
What is it about live music that makes it so special for you?
I love to see musicians play actual instruments in a live setting. Witnessing a musician play something in real time—which technically has never been played before and never will be played again—is what makes it special.

If you could go back in time and hear one of the jazz legends perform live, who would it be?
Wow, there are so many. Just put me in New York in the 50s. Or, if I had to pick one, I would say Charles Mingus in the mid '60s when Eric Dolphy was in the band. The music was great, but it sounded like something else was happening on stage that couldn't be captured on the record. Sometimes watching jazz musicians making eye contact is the best part of the show.

Which club are you most regularly to be found at?
I am happy to travel wherever the music is being played. When I lived in Knoxville there were several places within an eight-hour drive. I remember going to Atlanta to see Chick Corea's Origin band, Chicago to see Keith Jarrett's Standards Trio and The Brad Mehldau Trio on back-to-back nights, and Blues Alley in Washington, DC, among other places. These days I'll go up to Seattle to see a show that is not coming 175 miles south to Portland.

Is there a club that's no longer here that you miss the most?
Here in Portland there was a club called Jimmy Maks that shut down earlier this year. It would be nice if it were still around, not that I really liked it that much. It always smelled like food, and the loudest drinks to make were always made during the quietest musical passages. They had some great shows though: Cedar Walton, Al Foster, Dave Liebman—too many to name. Now musicians come and play different places which I actually like, so maybe I don't miss Jimmy Maks, after all!

Do you have a favorite club now?
I like The Village Vanguard (like every other jazz fan) because it's strictly about the music and it feels like it probably did in 1960. I think a great a club has to use the music as the foundation, then build from there. However, I'm aware that opinion does not put profit margin first, which is why the arts in this country are in their current shape.

Vinyl, CDs, MP3s, or streaming?
I prefer vinyl. I'm happy to pay $20 for a new record, and if it comes with a digital download, all the better. If musicians sold vinyl at shows they would come close to selling out every night. However, I know that space is limited and they don't travel around the country in a tour bus with a trailer for three months at a time.

If you were a professional musician, which instrument would you play, and why?
I think about this, but when I do, I'm never a musician. Musicians have the music inside them, and it has to come out. But very rarely do they seem to know why or how it comes out. The people on the other side of the glass who record and document the music are who I would like to be—a producer and an engineer. Plus, I'm more like them, in that they talk people's ears off about obscure bits of music. Also, I could do hundreds of recording sessions a year instead of gigging around the world wondering if I'm going to get paid!

What do you think keeps jazz alive and thriving?
It stays alive because there is a rich history and there are talented musicians who dedicate their lives to playing and championing the music. Is it thriving? How many of those musicians are making a living wage? Forget about getting rich.

Life without music would be...
Reading books about music!

Calling all jazz super fans! Do you drive your non-jazz-loving friends crazy with your encyclopedic knowledge of jazz history? Is jazz a big part of what makes life worth living? Do you have an extensive collection of recordings, save ticket stubs, go out to hear live jazz a lot, remember the first concert you ever attended? If any or all of those sound like you, you might be a Jazz Super Fan—and we'd like to consider you for an upcoming column. Contact us for consideration. 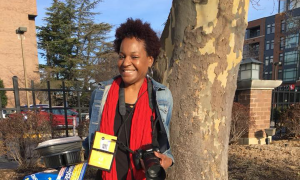 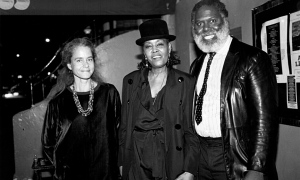 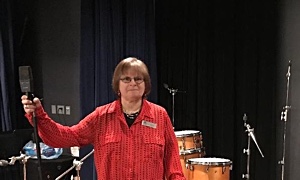 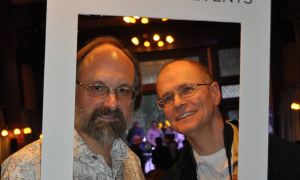 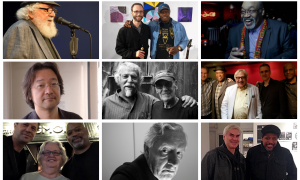 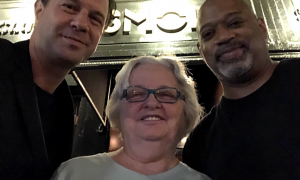