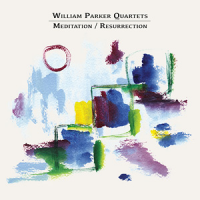 Bassist William Parker's Quartets (note the plural) presented here are, of course just a fraction of the ensembles he is currently organizing and working in. It is these 2 quartets that manifest the Yin and Yang that is Parker. The question might be, is his Quartet of trumpeter Jalalu-Kalvert Nelson, alto saxophonist Rob Brown, and drummer Hamid Drake,  the Yang, or positive/active/male principal in nature, and his In Order To Survive quartet with pianist Cooper-Moore switching with Nelson the Yin, or negative/passive/female force?

These two discs, Meditation / Resurrection, recorded on the same day with two differing approaches, exemplify the spiraling flow of Parker's music. The bassist's Quartet has a substantial body of recorded work beginning with O'Neil's Porch (Centering, 2001) and seven releases later, the eight disc boxset Wood Flute Songs. Anthology / Live 2006-2012 (AUM Fidelity, 2013), which was named as album of the year by many critics. Included in that box was a disc by his ensemble In Order To Survive, performing as a septet.

Disc one, Parker's traditional quartet is the first recorded appearance of Jalalu-Kalvert Nelson's trumpet. He replaces the bassist's longtime colleague Lewis Barnes and performs admirably.  The blues are the major threads here, and is it that masculine vitality of Yang? Parker allows his compositions to flourish with a certain swing. By laying down a bedrock pulse, he and Drake set Nelson and Brown free to fly. The piece "Criminals In The White House," written in 2001, certainly resonates today with an energy and commitment to witness and push back at injustice. The muscular nature of the pieces suggest a well drilled sports team, firing on all cylinders. This is body moving music. The sole departure for the Quartet is "Horace Silver Part 2," in which Parker trades his bass for the Spanish double reed tarota, Drake delivers pulses with a gong, and Nelson performs on the kalimba. The Quartet trades their Yang for Yin with a reflective inward gaze.

Disc two continues the deliberations with Cooper-Moore's evocative piano excursions. He can dance a keyboard like Cecil Taylor, and spin a trance like Don Pullen once did. His influence here set the In Order To Survive quartet free. Parker and Drake remain committed to pulse, yet the possibility that the music will explode is ever present. The pianist brings out a pugnacity in Brown's alto playing not heard on disc one. This inner tension keeps the ear attuned and wanting more music. This quartet's Yin spins a perpetual circle incorporating Yang, because there is not one without the other.