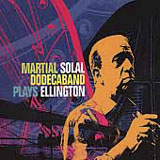 Martial Solal's big band is a revelation. I've loved his piano music since I started acquiring (mostly through mail order) his records in the late 60's. His big band writing can be seen as an extension of his piano, but it is much more. Like his piano playing there are all kinds of rhythmic stops and starts that may sound like unmusical special effects at first hearing but actually make entire sense.

I usually don't like "songbook" CD's because they often sound like pale imitations—why not just listen to the real thing. Solal has reconstructed these overplayed tunes, brought them up to date, and given them new life. They are still recognizable, but there are all kinds of rhythmic surprises, unexpected voicings, abrupt modulations, and turn-on-a-dime transitions that keep the band and the listener from settling in. Time continually shifts back and forth between 4/4 and free.

This twelve-piece band is more maneuverable than the standard big band. They can cut these complicated arrangements replete with unique voicings and freer swing concepts. Chautemps on soprano is the most prominent soloist besides Solal, but most players are featured at least once. The solos are short and integrated into the ensemble—they barely establish a groove before the music moves on.

Like Charlie Parker Solal loves to throw quotes into his music. If anything his are sneakier and more tongue in cheek. Some examples: a hint of "Reveille" in "Satin Doll;" a muted trombone passage from "Morning Air" by Willie "The Lion" Smith in the conclusion of "It Don't Mean a Thing;" maybe one measure of "La Cucaracha" hidden in the theme statement of "Take the 'A' Train." Some of his writing combinations have a similarly individual feel: An abstract tuba introduces "It Don't Mean a Thing" after which the piece moves into a reeds vs. tuba exchange and tuba-led ensemble passages. "Caravan" briefly features piccolo over brass.

The arrangements are not derived from Solal's Ellington piano record except "Satin Doll" which features Solal in a prominent but fragmented solo role. "Caravan," a 15-minute tour de force with a two-soprano lead, dies with a whimper. Trumpet and soprano solo simultaneously over the band during "In a Sentimental Mood." In the concluding medley of eight Ellington tunes there are no clear cut breaks between themes. Solal sometimes borrows a motif from one tune to use as a riff in another.

Satin Doll. Caravan. In a Sentimental Mood. It Don't Mean a Thing. Take the 'A' Train. Medley: Cotton Tail; Don't Get Around Much Anymore; Things Ain't What They Used to Be; Take the 'A' Train; Prelude to a Kiss; Sophisticated Lady; I Got It Bad; Do Nothin' Till You Hear from Me.