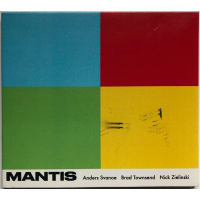 While taking a bit of a breather from releasing his State of the Baritone series, Anders Svanoe joined forces with bassist Brad Townsend and drummer Nick Zielinski to record Mantis. Svanoe's compositions paired with two-thirds of Minneapolis' avant-fusion band ARP of the Covenant (unplugged here) deliver an assorted mix of highly emotive styles. The trio upgrades the saxophone trio format with freedom, though freedom anchored by some heavy grooves. The title track "Mantis" marches a procession only to be broken up first by Svanoe's baritone exorcism of notes. The march progresses, interrupted next by Townsend's scraping bowed soliloquy. This is followed by a pulse, which could be the sampled background for a hip hop star's lyrics. With this trio, anything is possible. "Intersection" morphs from a shuffle groove to punk rock drumming, as Svanoe works the upper register of his massive horn and Townsend's bass is bowed in a semi- classical manner.

Schizophrenic? Yes, but there is a method to the trio's madness with their mission is to get you to shake some booty. "Skeddadle" is the epitome of 60's soul jazz, one you might have associated with Blue Note's Leo Parker. Svanoe blows those boss bari notes before his hand clapping accompanies his partners. Townsend matches the baritone's weight on "Monk In The Land Of Oz" paired with some Clyde Stubblefield inspired drumming. When the trio turns to a ballad, "Rosy Cheeks," the light dims and the sound bleeds a most gentle graceful charm. We are entertained.