Leo Parker was the proud owner of a big, beefy baritone sax tone and a fluent technique that struck a great match between the gritty, down-home feeling of R&B and the advanced harmonies of bebop. At first, he studied alto in high school, even recording with Coleman Hawkins' early bebop band at age 18 on that instrument in 1944.

Parker was very active during the 1940s in several bebop bands, like the Billy Eckstine Band, breeding ground for a lot of upcoming jazz musicians. When Billy needed a baritone saxophone player in his band, he gave one to Leo Parker, nicknamed The Kid, who played the alto sax up to that time. Another story says that he took up the baritone to be not mixed up with his namesake Charlie Parker seems to be far-fetched. He became an excellent baritone player in the bands of Dizzy Gillespie and Sir Charles Thompson and combined fine bebop elements with rhythm and blues licks.

He worked with Dizzy Gillespie's band on 52nd Street in 1946 and Illinois Jacquet's group in 1947-1948, and recorded with Fats Navarro, J.J. Johnson, Dexter Gordon, and Sir Charles Thompson; he scored a hit with Thompson, "Mad Lad," on the Apollo label.

In 1954 it stopped. Leo Parker withdrawed from the jazz scene, as is said due to lung problems, but his narcotics seem to be more likely. But it was no retirement for ever - in 1961 he came back with two great Blue Note albums. The first one, recorded September 1961 is his well known album "Let Me Tell You 'Bout It"; the second one was recorded a month later, but not released before 1986 as "Leo Parker Rollin' With Leo," although it seems that the cover had been finished already. The mono version (Blue Note normally made two version in this period) was never issued and several tunes made during this session were rejected. Four of them are to be found on 45rpm records.

The members of his sextet are all rather unknown and obscure musicians: Bill Swindell on the tenor saxophone, Dave Burns on trumpet, Johnny Acea on piano, Stan Conover on bass and Purnell Rice on drums. In the second recording session one week later, Al Lucas replaces the bass player and Wilbert Hogan is the new drummer man. This record is labeled as one of Leo Parker's best and, to be honest, I fully agree. It is great to listen to this skilled baritone player, who, to quote Dexter Gordon: This Kid could play, lots of bottoms.

Leo Parker, or Mad Lad as he was also mentioned, passed away four month later, when he was already working on his third Blue Note album in February 1962. He got a fatal heart attack in New York City on the 11th of February 1962 now 46 years ago. The record Leo Parker has been reissued on CD as Leo Parker Rollin' With Leo. (Blue Note 84095 )

Parker seemed to be on his way, with a comeback on the Blue Note label and two lively albums that successfully combined his blues, gospel, and bop backgrounds. But only a few months later, a heart attack felled him at the age of 36 Show less 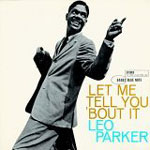 Back To Back Baritones 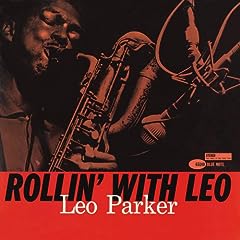 All About Jazz musician pages are maintained by musicians, publicists and trusted members like you. Interested? Tell us why you would like to improve the Leo Parker musician page.