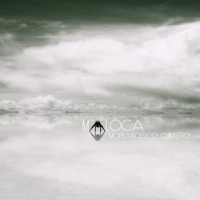 A maloca is an ancestral long house used by Indians in the Amazonian jungle to receive outsiders and exchange knowledge and ideas.

Italian bassist Francesco Valente became fascinated with the idea of the maloca on a trip to Brazil, Bolivia and Peru. A close perusal of the album cover reveals him doing a push-up between the M and the L of MALOCA at Uyuni, in Bolivia as a tropical storm looms.

Valente, 39, now lives in Lisbon, where he studied jazz bass at the Escola Superior de Musica and now studies ethnomusicology at the city's Universidade Nova. Through the latter he discovered classical composer Bela Bartok and the work he did to preserve the traditional music of his native Hungary.

When he formed a quintet featuring Guto Lucena, a Brazilian now living in Sweden, on saxophones and bass clarinet and Johannes Krieger, from Germany, on trumpet, Valente invited Bartok into the musical maloca they created.

This, the quintet's first album, features jazz versions of Bartok's "An Evening At The Village," "Ket Roman Tanc" and "Buciumeana-Romanian Folk Dances." They are all remarkably accessible, perhaps not that surprising. Bartok, while initially suspicious, took an interest in jazz, writing a concerto for violin and clarinet which was performed at Carnegie Hall in 1939 with Hungarian violinist Joseph Szigeti and Benny Goodman as soloists.

If all this makes Maloca sound like some kind of academic exercise: it ain't. The album really cooks right from the off, trumpeter Johannes Krieger's "Tjap Tjap Tjap," featuring fine work from the leader and Iuri Gaspar on piano.

The title song, as you might expect, is Latin-tinged and percussive with Gaspar's piano bringing to mind McCoy Tyner. It ends with a joyous yell of "Maloca!" Valente sees this as "an explosion of enthusiasm but also a defiant proclamation of how much better the world would be if all our houses were open to diversity."

Thinking man's music, Euro jazz/fusion at its very best: Bartok would have approved.