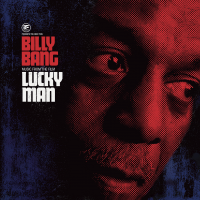 When he performed in Germany, they called him the "black devil violinist," his frenetic playing wrapped in a gyrating, trance-like state. For Billy Bang, who believed he had schizophrenia, the epithet bore a resemblance to his inner turmoil. He was born William Walker in Mobile, Alabama but grew up in the South Bronx. He studied violin and classical music, and his talent earned him a hardship scholarship to the Stockbridge School in Stockbridge, Massachusetts. Bang felt out of place in the predominantly white prep school and quit, returning to the Bronx, where he was drafted into the army. He fought in the infantry during the bloodiest period of the Vietnam War's TET Offensive. Back home, now with substance abuse problems, he found his neighborhood re-christened as Fort Apache; with burned-out buildings and urban decay, the South Bronx itself looked like a war zone. Bang's expertise in weaponry led to a job buying guns for a black militant group. He wandered into a pawnshop's backroom on one such buying trip in Baltimore and found a twenty-five-dollar violin hanging from the wall. He brought it home and started over.

In New York's avant-garde and experimental loft scene of the 1970s, Bang studied with Leroy Jenkins and began playing and recording with David Murray, Frank Lowe and others. In the 1980s, he played with the Sun Ra Arkestra. But Vietnam haunted him. It would be seventeen recordings and three decades later that he found catharsis in his music. What Bang unlocked with Vietnam: The Aftermath (Justin Time, 2001) and Vietnam: Reflections (Justin Time, 2004) was—in his words—"painful, but it was very honest and truthful for me." Bang took that reckoning a giant step further, returning to Vietnam in 2008. Out of that journey comes Lucky Man.

French cinematographer/producer Jean-Marie Boulet and German multi-media artist Markus Hansen shadowed Bang on his voyage through Ho Chi Minh City, the Mekong Delta, and the 17th parallel, which divided North and South Vietnam. Lucky Man is the title of both their documentary film and this soundtrack. There are twenty-two audio tracks, of which twelve are spoken narrations taken directly from the film and mostly alternating with musical tracks. The music is unlike anything else that Bang had recorded.

"Billy playing with the Banhar Gong Group of Kuntum" is, as the subtitle indicates, a mix of traditional Vietnamese and improvised music, the latter falling primarily to the violinist. Here we see the difficulty in communicating as Bang encourages the ensemble to decrescendo with frustratingly slow results. No matter; the piece is superb. "Mystery of the Mekong," with the Hanoi Symphony Orchestra, is a stunning avant-garde orchestration of Bang's Vietnam: The Aftermath composition. In "Song for Don Cherry," Ho Chi Minh City native Duc Dau plays a "dan da," a primitive stone idiophone comparable to the vibraphone. Bang improvises along with Dau, and the two become caught up in a rapid-fire contest. A brief but moving highlight of Lucky Man is "Moments for the Kiamia." Bang plays solo in an interior courtyard of a hotel, the sounds of the violin echo off the grey concrete, and the background noises of guests and workers become part of the music.

The documentary film is raw at times, particularly in its footage of the war, but it goes a long way explaining what Bang feels. The spoken tracks are mesmerizing and seamlessly incorporated into the field recordings. Bang sometimes sounds like he has conquered his demons, but at other times, his pain is palpable. Always, he is acutely aware of the same racial dichotomies that Dizzy Gillespie struggled with as a U.S. State Department Jazz Ambassador. Bang talks about the trauma of coming home to a country jeering rather than cheering its vets. There's no bitterness in his voice, but there is profound sadness, regret, and a reluctant acceptance. As a stand-alone feature, the music conveys much the same context and emotion; Bang's trademark acerbic but animated style is peppered with the violinist's inner dialog. He says, "You can't hurt a guy that got no more feelings." In Bang's case, neither of those things seem authentic. He died of lung cancer three years after completing this project, but his final act may have been his best.

The documentary film Lucky Man will be previewed on April 28, 2021. The soundtrack will be released as a three-disc LP, CD, and in digital format.