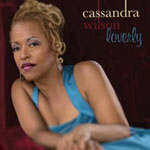 Cassandra Wilson's Loverly is amongst the singer's most straight-ahead and stripped down albums since her debut for Blue Note fifteen years ago with Blue Light 'Til Dawn (Blue Note, 1993). Self-produced, and recorded in a rented house in her hometown of Jackson, Mississippi with little artifice, simple arrangements and a great sound, Wilson and a core quintet of regular playing partners deliver ten standards, Robert Johnson's "Dust My Blues," and one band original, the West African-derived "Arere."

Wilson hasn't sounded this good for some time—elegant, unforced and buoyant. And in the rhythm. Most of the tracks are underpinned by kit drummer Herlin Riley and Nigerian drummer and percussionist Lekan Babalola. Wilson calls herself the "unproducer," but her decision to create Loverly's arrangements from the drums up, starting with rhythm patterns suggested by Babalola and Riley, contributes immensely to a set shot through with mettle.

The drummers are joined by two more class acts, guitarist Marvin Sewell and pianist Jason Moran. Chicago-born Sewell brings a down home directness to the music, Moran a measure of unpredictability. It's an effective combination. Sewell is nicely nasty on a funked-up "St. James Infirmary" (which also features a gutsy cameo from trumpeter Nicholas Payton) and doffs his hat stylishly to slide guitarist Elmore James on "Dust My Broom." Moran solos with abandon on "Caravan" and "Infirmary," and more reflectively on "Spring Can Really Hang You Up The Most."

ADVERTISEMENT
Wilson herself brings fresh air to some very familiar material. She's utterly poised and in control at slow tempos—as on the gorgeous "Black Orpheus," "'Til There Was You" and a definitive "The Very Thought Of You," given a deliciously slow reading accompanied only by bassist Reginald Veal. And she kicks it out with elan at faster tempos, like the opening "Lover Come Back To Me."

Positivity and good humor permeate practically every track. Even "Wouldn't It Be Loverly" is celebratory and heartwarming, refreshingly free of the pathos with which it is more usually tinged. (Wilson is pictured sitting in the song's "one enormous chair" on the cover).

"St. James Infirmary" and "Dust My Broom" are a little darker, but they too have a vitality which is infectious. Even "Spring Can Really Hang You Up The Most" sounds like something to move forward from rather than something sorrowful to get stuck in.

Lover Come Back To Me; Black Orpheus; Wouldn't It Be Loverly; Gone With The Wind; Caravan; 'Til There Was You; Spring Can Really Hang You Up The Most; Arere; St. James Infirmary; Dust My Broom; The Very Thought Of You; A Sleepin' Bee.