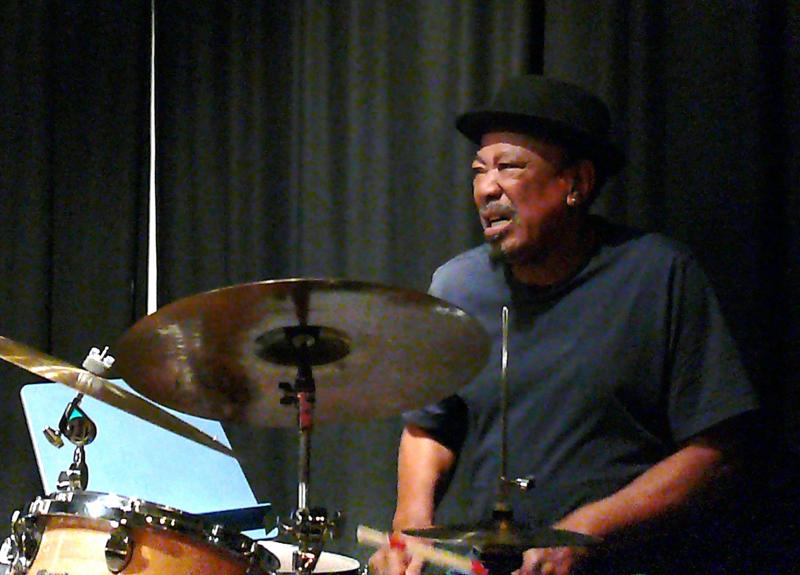 As George the besuited MC said in his introduction, when you saw the lineup you knew this was not one to miss. And the packed audience at north London's Vortex was testament to the fact that his view was widely shared. Even though South African drummer Louis Moholo-Moholo remains a frequent visitor to London since relocating to his homeland on a permanent basis, his visits are still something special. Instead of his regular unit, tonight's personnel had more the appearance of a blowing band, with both saxophone giant Paul Dunmall on tenor, and trombonist Alan Tomlinson, who is more strongly associated with the improvising scene. One holdover from the unit was upcoming pianist Alexander Hawkins, and he proved the link between a free for all and Moholo-Moholo's normal song-based fare.

As it was, the opening installment set a template with Hawkins and Moholo-Moholo laying down the framework from the drummer's repertory—an expansive unison with a South African kwela feel—over which the horns ran riot in boundless colloquy. Anchoring everyone with a steady pulse was bassist Ollie Brice, on his first ever gig with Moholo-Moholo, while Tomlinson plunged his hand into the bell of his horn as an impromptu mute to color his effervescent lows and Dunmall probed on muscular tenor.

Now 70, Moholo-Moholo nonetheless set the pace, matching formidable passion with percussive wisdom without ever totally going for broke. It was definitely the South African's group, subtly guided and directed by him, though in close communion with Hawkins. The pair maintained eye contact for much of the time, feeding off each other's cues. As the pianist crescendoed on the first number, Moholo-Moholo crashed on his cymbals, prompting Hawkins to switch his tack and plunge into the relentless vamp of Jason Yarde's "The Tag" from his album An Open Letter To My Wife Mpumi (Ogun, 2009). Dunmall picked up the riff as the initial phrase of a searching oration, soon to be joined by the trombonist in a garrulous counterpoint which loosely recalled a rumbustious South African vocal choir.

Even though there was a fair degree of unfettered expression, it wasn't all upper case bold. Partway through the first piece, Moholo-Moholo stilled the ensemble for a quiet pointillist section, scratching his brushes on his drum heads, encouraging more timbral exploration. In response Hawkins' plucked inside the Vortex Steinway, and Tomlinson partly dismantled his horn before emitting blurts through the pipework, while Brice unsheathed his bow for some sonorous scraping. At length the sounds became more sustained, as Tomlinson muttered on his muted trombone like someone mildly annoyed with the turn of events, reluctant to make a fuss but unable to keep it to himself. 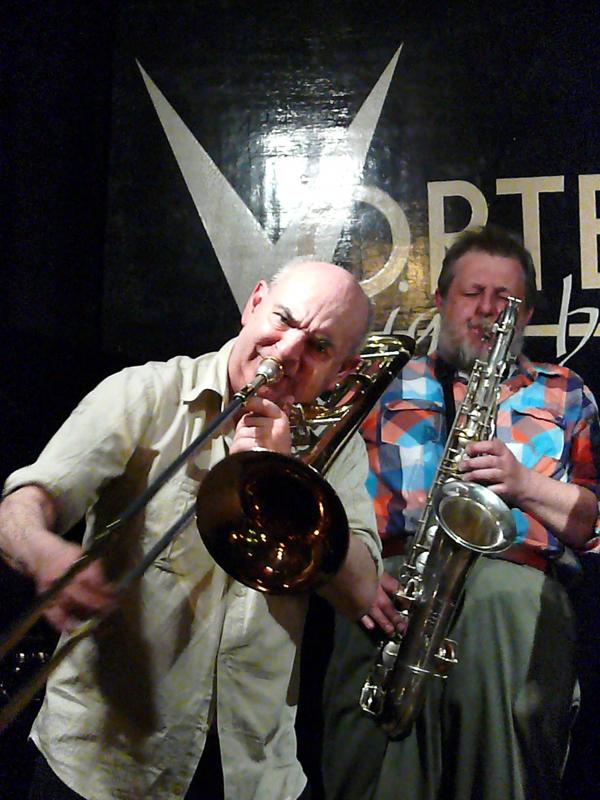 Gradually a blues sonority emerged, fueled by Dunmall's smoking tenor, Moholo-Moholo even playing the turnaround at one point, burning slowly with just intermittent flares. Brice and Hawkins kept close track of the drummer's trajectory, but Dunmall was in full fire-breathing mode, punctuating his skittering, serpentine lines with astonishing guttural exclamations which raised the hairs on the back of the neck. However, even such feats of musicianship weren't sufficient to ensure that he remained the sole focus of the listener's attention.

His fellow musicians also needed to give Tomlinson a wide berth: he was an exuberant presence, commanding the performance area with sweeping gestures magnified by his trombone slide at full extension, first pointed at the ceiling, then stage left, before then panning right, spraying puckish bluster and braying smears. Though a sometime member of the London Jazz Composers Orchestra and veteran of Peter Brötzmann's 'Alarm' collective, the London-based Mancunian often displayed a comic sensibility. Here it was largely kept in check, except for his occasional attempts to tickle the noses of the front row with his slide, and one brief solo where he chuntered, hummed and popped some tubing from his trombone, all without missing a beat, causing a guffaw from Dunmall. A date with the Dutch master of mayhem, drummer Han Bennink, would be a perfect match.

Although Hawkins took on the responsibility of generating structure with repeated incantation-like figures, there was also space for even more energetic pianistics. At one stage he erupted, unleashing his inner Cecil Taylor in a fantastic piano trio passage, complete with spidery runs capped with Tayloresque motifs at the end of his lines. Later among his melodic fragmentations, it sounded as if he were interpolating "Somewhere Over The Rainbow" into a thunderous mash up.

In spite of his leadership role, Moholo-Moholo didn't feel the need to take a drum solo. Instead, he toyed with forms, easing in and out of intensifying firestorms with a light touch. Change was demarcated through freely wielding subtle, splashing cymbals, clattering rim shots and an insistent bass drum, without the need to pile on the power. There was no bass spot for Brice either, though on occasion he did step out at the forefront of the piano trio, getting away from the propulsive throb which was his stock in trade. 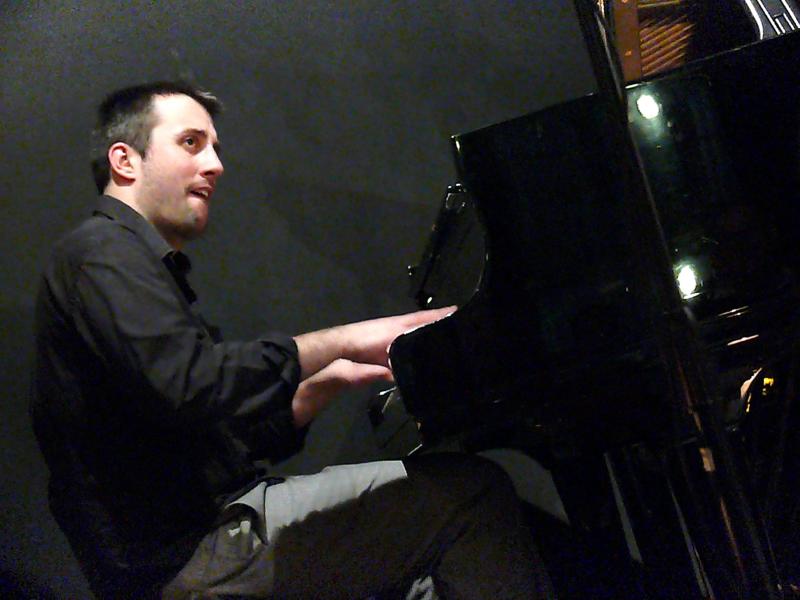 But it was the glorious ensemble play, evolving out of the tunes/structures into more uncharted terrain, which stuck in the mind. As they neared the end of the second set the renditions from Moholo-Moholo's repertoire became shorter and more intense, among them his old comrade from the Blue Notes, trumpeter Mongezi Feza's "You Ain't Gonna Know Me 'Cos You Think You Know Me," from the drummer's classic Spirits Rejoice (Ogun, 1978). Even though there was consequently less room for the wilder extemporizations, you couldn't begrudge them their crowd-pleasing fun.