The Gaddabouts: Look Out Now!

By DAN BILAWSKY
November 22, 2012
Sign in to view read count 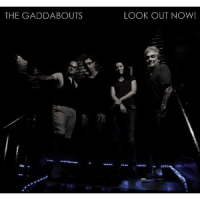 Steve Gadd is the subject of much adoration and nerd-like obsession in drum circles. Several years ago, the drummer embarked on a clinic tour—dubbed Mission From Gadd—where he got up, spoke, and played a bit for his eager fans. At one of these appearances, at a Long Island high school, Gadd became the drum equivalent of William Shatner at a Star Trek convention. Audience members threw out absurdly specific questions about random fills from songs that Gadd had recorded decades before; this is the type of reaction that he can engender from his stick-wielding fans.

That Steve Gadd is renowned for his killer drumming with sophisticated pop icons Steely Dan, pianist Chick Corea and countless others, but then there's the other Steve Gadd; the one who goes into the studios and lays down seemingly simple backbeats that groove harder than all the bells-and-whistle beats that so many others record. That's the Steve Gadd behind the Gaddabouts.

This group is fronted by vocalist Edie Brickell, who's far removed from her pop star days, and made up of veteran session men who have crossed paths with Gadd at various times in the past. The music is roots-based fare with an ultra-casual feel; it's the kind of stuff that sounds simple in these expert hands, but isn't so easy to create. Swampy grooves, jazz-inflected sounds, soulful corners, country roads and folksy pop are all explored in winning fashion.

Some of the music was born of jamming ("Meat On Your Bones"), while other tunes speak of a fully formed songwriting process ("Blessed Days"), but all of it has a million dollar rhythmic feel to it. Singer/songwriter Paul Simon's influence looms large on "Wicked William," the band marries a jazz vibe with a reggae-derived section on "House On Fire," and a slow martial snare drum groove underscores the riveting "Down," which features some charming violin work from Andrea Zahn.

While the core group is a quartet, with bassist Pino Palladino and guitarist Andy Fairweather Low rounding out the lineup, plenty of high-profile guests gathered from Gadd's Rolodex help to flesh out the sound of the group. Multi-reedist Ronnie Cuber brings his saxophone work to bear on "House On Fire" and "Can You Feel It," expert colorist/keyboardist Larry Goldings puts all sorts of finishing touches on the music, and Gadd's Steps Ahead/L'Image band mate, mallet master Mike Mainieri, makes a few important contributions along the way.

This album features a bunch of strong jazz personalities, but it isn't a jazz album. This is music made at a modern Americana crossroad, where a savvy singer-songwriter and never-miss studio icons meet.

CD1: Meat On Your Bones; Look Out Now!; Wicked William; House On Fire; I'm A Van; River Rises; The Horse's Mouth; Blessed Days; Devil's Story; Down. CD2: Free; The Mountain; Don't Take All Day; How I Love You; Can You Feel It; Younger Woman; Corruption.