By MARK CORROTO
February 6, 2017
Sign in to view read count 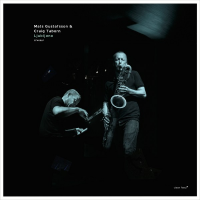 Congratulations to whomever conceived of this pairing of two improvised music giants. Pianist Craig Taborn and saxophonist Mats Gustafsson, both born in the great white north (so to speak), Taborn in Minneapolis and Gustafsson, Umeå, in Northern Sweden. Both are original and distinctive improvisers whose paths had never crossed until the 2015 Ljubljana Jazz Festival.

Taborn, of late, has been christened heir to the improvised piano chair of Keith Jarrett by ECM records chief Manfred Eicher. This is evidenced by his releases, the solo Avenging Angel (2011), in trio Chants (2013), and as a sideman to Roscoe Mitchell, Ches Smith, Michael Formanek, and Chris Potter. The pianist is very selective as to how he is heard on record and with whom he works. The highlight of 2016 was his tour and recording with fellow pianist Kris Davis on Duopoly (Pyroclastic). Gustafsson's approach may represent the flip side. True to his DIY punk nature, his associations are various, fast, loud, and seemingly out-of-control, playing in the garage-jazz ensemble The Thing, with noise artist Merzbow, rocker Thurston Moore, with Peter Brötzmann, and his free jazz ensembles Fire! and Nu Ensemble. He would sit in with Black Flag, if they were still touring.

Pairing these two artists is not so much about yin/yang or push/pull, although there is a bit of tug and enticement to be heard here. Taborn opens "The Eyes Moving. Slowly." with a loping Carl Stalling cartoon sound and pulsing left hand notes to draw out Gustafsson's baritone saxophone bark. Having done so, he proceeds to produce his version of energy jazz, peppering and splashing notes with his right hand. Pairing these seemingly disparate instruments and performers yields an amazing cooperation. Gustafsson's signature slap-tongue playing and vocalizations serve to expand the possibilities, and his ability to reign in the bedlam fits with the quieter passages.

This dilation and contraction works to the players' advantage with the second cut, "The Ears Facing The Fantasies. Again." Taborn's percussive left hand churns the improvisation as he brings the piece to a boil, pressing Gustafsson to push his accelerator. The energy subsides one-third of the way through for a bit of introspective sound. Fans of the saxophonist's solo work will recognize Gustafsson's command of the obtuse baritone. He is able to coax whispers and shouts, play amazingly fast and respond to the nimble fingers of Taborn. The wow factor is quite high for this performance.

Ljubljana is being issued as a 180 gram vinyl LP with a digital download code.

The Eyes Moving. Slowly; The Ears Facing The Fantasies. Again.