By Glenn Astarita
December 22, 2007
Sign in to view read count 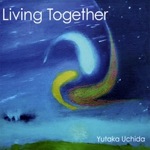 You don't need to be a music scholar to discern that drummer/composer Yutaka Uchida has immersed himself within a broad spectrum of jazz-related styles. After honing his practicing and educational musical persona in his native Japan, Uchida sojourned to New York City and became active in various jazz-related performances and disparate projects. As a composer, the artist has received grants. And here, the drummer creates a masterwork based on an acoustic-electric fabric of sound. While Living Together won't be considered a masterpiece of epic proportions, it is easily one of the top outings of the year.

Its impeccably rounded-out program highlights Uchida's strong compositional pen, and is designed with memorably melodic content. He triumphantly bridges that rather opaque perimeter that is framed upon hard-hitting jazz fusion, swing and radio-friendly contemporary jazz. An ace drummer who occasionally breaks out with sweeping polyrhythmic fills, the respective pieces span a gamut of emotive and thematic frameworks.

The opener, "Mother Sea, is constructed upon a simple yet entrancing Edgar Varese type theme, spiked up with Ben Sher's ethereal jazz guitar phrasings and James Cammack's monster bass lines. Each comp stands on its own, however. Uchida's arrangements feature peppy shuffle grooves, gradually ascending wing vamps and tuneful hooks. It's largely about the ensemble's acute placement of dynamics and warmly-crafted passages.

On "Dryads, the band executes a tender ballad that is notched up with Sher's distortion-heavy guitar voicings and toned back down by Eishin Nose's subliminally rendered synth swashes and keys. But variety plays an important role, as the drummer steers the group through fluid, Latin jazz motifs amid some blustery sax soloing by Sean Nowell. And they rock out via a commanding jazz fusion gait on the straight-head and hyper-mode "Torrent of Lava.

At the end of the day, we can only hope that Uchida pursues an active recording career. This is a standout effort that communicates the total package, and it would be a crime for this sparkling gem to go unnoticed. There's a lot for everyone here, whether they require a smooth transition or break-in period to become acclimated to the world of jazz, or are seasoned aficionados who cherish impressive chops coupled with a sense of endearment through an elevated example of compositional form.