By KARL ACKERMANN
September 4, 2018
Sign in to view read count 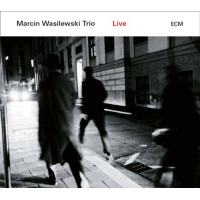 It is timely, albeit in a melancholy way, that one-time Tomasz Stanko protégé Marcin Wasilewski and his trio would offer a retrospective live performance that closely coincides with the passing of the legendary Polish trumpeter. The pianist, still just in his early forties, first recorded with Stańko's octet while he was a teenager and quickly went on to release his first Simple Acoustic Trio album, Komeda (Not Two, 1995), at just twenty. From the outset bassist Slawomir Kurkiewicz and drummer Michal Miskiewicz have been equally integral in shaping a distinctive sound that has straddled lines between minimalism, free playing and perpetual inquisitiveness. Live is the first planned release of the trio in performance though an earlier album, 20th Getxo International Jazz Festival (Hilargi Records, 1996), was apparently documented by the venue itself.

Initially, it is a bit of a disappointment to learn that five of the six tunes on Live were taken from Spark of Life (ECM, 2014), given the wealth of exceptional material on the group's previous ECM albums, Trio (2005), January (2008) and Faithful (2011). That said, Spark of Life was a quartet album with tenor saxophonist Joakim Milder appearing on many of the tracks and so what we have here is a fresh perspective enhanced by the energy of a live performance. Take "Spark Of Life / Sudovian Dance"—as a medley—employing that familiar slow build up through the first half of its twelve-plus minute run. Wasilewski then takes the second half to new heights with his charged solo. Sting's "Message in a Bottle" is a longer, freer, looser interpretation giving Miskiewicz an opportunity to expand on his excellent drum solo of the previous version.

The source outlier on Live is "Night Train To You," from Faithful. The Wasilewski composition stays true to its amalgam of groove and lyricism but here with the palpable dynamism of a well-oiled machine pushing its limits. "Austin"—recorded in trio format originally—is the only ballad on the album and in most respects, an accurate version of the beautiful original. Herbie Hancock's "Actual Proof" closes the album in an intense, spirited route that leaves the a five-thousand audience members at the Middleheim Jazz Festival ecstatic.

The Marcin Wasilewski Trio of recent years has moved beyond their austere roots to a tranquility and airiness that often gives way to a show of force. Over time they have patiently and subtlety created a new identity where their low-key approach is often a stage-setter for their power trio alter ego. In this Live environment, partially fueled by an enthusiastic audience, the trio surpasses even their best studio material.