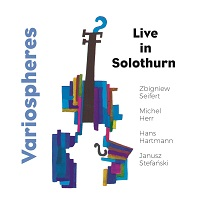 When Tomasz Stanko's first classic quintet came to the natural end of its road in 1973, with all its members looking for new directions in music, violinist Zbigniew Seifert embarked on a solo career that saw him record a number of albums with very different line-ups. In fact, bar a brief period at the end of the 1960s, Seifert never led a steady group for any length of time. This lack of a strong and consistent vehicle may explain why he was, for many years after his death in 1979, a largely unknown figure, both in his native Poland and, to a lesser degree, abroad.

The short-lived quartet Variospheres, recorded here at International Swiss Jazz Days in January 1976, is perhaps indicative of the sort of dynamic band that Seifert was searching for to interpret his striking compositions.

The modal jazz that stirred Seifert's passion is heard to equally dramatic effect on the epic "Man of the Light." Hartmann maintains, with slight deviations, a single-note vamp that casts a hypnotic spell as Seifert and Herr stretch out. Here, Seifert demonstrates his innate lyricism even at blistering pace, his soaring improvisation as seductive as bird song. Hartmann's bass ostinato is a little high in the mix on "Way to Oasis"—in general the quality of this recording is less than perfect—but that doesn't detract from stellar solos from Seifert on electric violin and Herr on electric piano, with Stefanski's ever-present fire encouraging both. Structurally, it's one of Seifert's simplest tunes, built upon rising-falling waves of intensity, and carried by the virtuosity and invention of the leader.

The pace eases off a tad, and with it the intensity, on Herr's extended composition "The Sound of Gold"—an even-tempered arrangement that frames individual forays of contrasting hue from Seifert, Hartmann and Herr. The change in tempo and atmosphere, in an otherwise highly-charged concert, is highly effective.

Two classic Seifert compositions round out the set; "Turbulent Plover," another high-tempo modal workout, fuelled by Stefanski and Hartmann's frenetic rhythms, features terrific solos from Herr on acoustic piano—unfortunately low in the mix—and Seifert, whose prolonged, dizzying attack precedes a feature spot for the hard-working Stefanski; "On the Farm" begins with another mesmerizing, unaccompanied outing from Seifert, this time more folksy in flavour, before he strikes up the memorable head. Herr's electric piano solo is underpinned for the first time by comping from Seifert, who in turn picks up where he left off, switching from acoustic to electric violin to ignite this feisty jazz-fusion workout.

Listening to Seifert's breathless improvisations with Variospheres it's easy to forget that, though classically trained, he'd only taken up jazz violin five years previously, having played saxophone up to that point. Variospheres could well have provided Seifert with the necessary stimulus to experiment further and expand his language, but sadly the quartet's 1976 tour of Germany and Switzerland was to be its first and last hurrah. This electrifying concert, for all the technical imperfections in the recording quality, serves as a fine testament to Seifert's extraordinary talent

Unidentified piece; Man of the Light; Way to oasis; The Sound of Gold; Turbulent Plover; On the Farm.